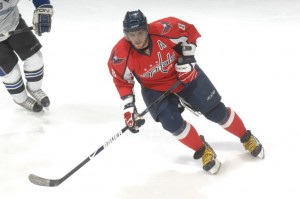 Big rumors (news?) are circulating that the poster boy of CCM hockey, Alexander Ovechkin of the Washington Capitals, will no longer be on the companies roster for the upcoming 2011-2012 NHL season.

Nothing is confirmed currently, nothing that I could dig up at least, but rumors are Ovechkin will be sporting Bauer products. Ovechkin was seen a few years back playing with a Bauer stick. Some felt the move was due to his unhappiness with the inconsistency and durability issues of CCM sticks, while others thought CCM had asked him to use other sticks and then provide feedback to make their products better. Still though, nothing was confirmed why he used the Bauer products.

Perhaps being a little skeptical, and maybe using a little business logic, it seems unlikely that Ovechkin will use anything other than CCM products. Well, at least for this year. With huge ad campaigns and a whole product line following the superstar, I just do not see the change being pulled off so quickly. To me, Ovechkin would have to have a contract set in place by CCM hockey that would not allow him to jump ship right now, or perhaps pay a large penalty for negating the contract. Sure Ovechkin is one of the top paid NHL players in the league, but I don’t see him paying up to use another brand. But then again, crazier things have happened.

It is unclear right now what is fact and what is rumor, but if Ovechkin was to play with another brand this upcoming NHL season, what brand do you think he would be sporting and why?

Alexander Ovechkin, the Washington Capitals superstar, has left CCM and joined the Nike team with an apparel and product endorsement.

Ovechkin has scheduled a press conference for Tuesday, September 6th, where he is expected to announce his endorsement deal with Bauer Hockey. If you visit Bauer.com, you will notice a brand new intro and header which shows the Bauer APX skates, with Ovechkin’s signature yellow laces. The text reads “This year will be different.” You can expect Ovechkin will now be wearing the APX skates this season when he suits up rather than the CCM U+ CL skates.