For my initial impressions of the BattleAxe BX7 stick, click here.

After playing five inline hockey games with the BattleAxe BX7 stick, here is a mid-season review of the stick I have been using this season. Check back later this summer for a recap at the end of the current summer roller hockey season. 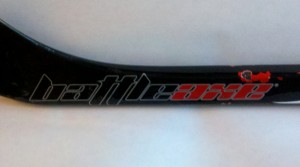 The look of the BattleAxe logo at the blade and shaft wear above it.

Pros: Perfect for both defensemen and forwards, grip finish leads to increased control on the stick, carbon fiber wrapped blade, comes off the rack longer than most sticks.

Cons: Begins to chip sooner than one would like, grip finish doesn’t extend further down shaft.

After a handful more games with the BattleAxe BX7 stick, here is a mid-season update for those who are looking to purchase a new stick. There is a ton of things I love and rave about the stick. As I noted in the initial review, it is lighter than my original composite stick yet it has enough weight to make it feel like I am holding a durable stick and not something made of a toothpick. Some players like using the lightest stick they can find, but I prefer something to have a little bit of weight behind it.

The stick has taken a beating along the bottom-half of the shaft closer to the blade, but the blade itself is free of any major chips, dings and dents. There is a small chip exposed at the heel of the blade, but I am sure it is due to how I tape my stick (where it is exposed from the heel to midway down the shaft). There is a decent amount of chipping at the area where it transfers from the shaft to blade. It first began in the first game I played right after the initial impressions review and has grown to a couple more spots. It chipped through the paint and I can see the carbon fiber. I have played 4-5 games since then and I haven’t seen any reduced performance.

I played a few games without cutting down the stick and I noticed how I was unable to get maximum power on snap and slap shots. I cut approx. 1.5″ off the top and I noticed a big difference in shot accuracy and power. The longer-than-normal is both a blessing and a curse, as taller players like myself are used to having to purchase a shaft extension to make it longer. This stick I had to cut down to make it the appropriate length. Some sizing notches on the bottom side of the shaft could be a good touch to add to future sticks. Due to the low kick point of the stick, I am able to keep slap shots from the point on net and not have them sail over like I am kicking a field goal in football. I have also found I have more control when skating with the puck and my passes are more accurate to my teammates.

I also like the shaft and blade is wrapped in carbon fiber. It is an extra-strength feature that isn’t seen in sticks until the price point of $160+. You can purchase the BX7 stick from the BattleAxe website and other dealers for as low as $87.95 sans taxes and shipping.

As someone that spends time playing both forward and defense, this stick doesn’t favor one or the other. While it has the curved tip that most forwards use, defensemen can use this stick especially if they are involved in the offense when it comes to setting up power plays and taking shots from the point.