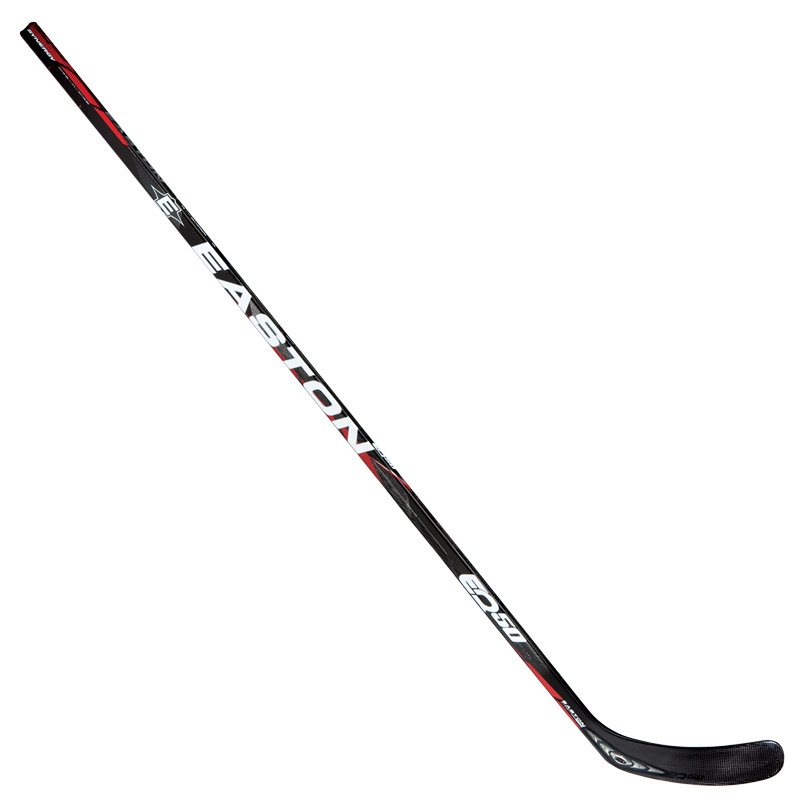 If you haven’t checked out our Easton EQ50 hockey stick initial impressions, that would be a good place to start. Since our initial impressions, the EQ50 has been put through a lot of hours on the rink, and be tested pretty thoroughly. I’ve been really pleased with how the stick has held up thus far. Read on for our full breakdown.

Pro: balance, shot power, load capacity
Con: Accuracy
To the Point: Great stick that follows up right where the SE16 left off, with a few additional features, but still a bit pricy.

If you’re coming from an SE16, or anything in the Easton Synergy line, you’re going to be happy with the Easton Synergy EQ50. You’ll find out quickly that there are very few surprises with this stick, which is a good thing. Easton stick lovers will be able to pick up the stick and immediately know what kind of performance to expect out of it. If you’re coming from a different brand, it will also be a pretty easy transition. Most of this can be attributed to the great feel it has, but also because of the weights in the end cap. Within a few minutes you can have the weights adjusted to reach your optimal balance point, and you’re ready to play. While this can be a great feature, it does also add another step to your prep work and this can be a step a lot of players don’t want to take.

As I mentioned before, the EQ50 feels great in your hands, but it also gives you a great feel of the puck on the rink. However, I noticed the stick was much more responsive to what I was doing on the ice rink, with a heavier puck, than on an inline rink. There were actually a number of cases playing inline where I completely lost the puck skating with it because I couldn’t feel it enough. On ice, it was exactly the opposite. I was able to skate with the puck, head up, and not randomly have the puck slip away.

What I really loved about this stick was the shot power. Right from the get-go, I noticed how nicely the shaft would flex and load up before launching a shot. Slap-shots genuinely felt pretty incredible. Wrist and snap shots were no joke either. The EQ50 is a stick I had a lot of confidence leaning into a lot and really letting a shot rip. Going hand-in-hand, I also loved making passes. Noticing the stick load up before making a long crisp pass was a treat. I’ve never really picked up on anything like that using sticks in the past.

My shooting experience wasn’t always great though. The one thing I noticed that I was consistently off on was my slapshot accuracy. Wrist shots and snap shots were typically sniped high glove side, as usual, without a problem. Every slapshot I took, however, was missing the net. I resolved the problem by forcing myself to roll my hands over more on the follow through, allowing my shot to hit the net more consistently. But at this point, if I’m adjusting the mechanics of my shot to hit the net, I think its fair to say that the issue lies within the stick. The probable cause for this issue is using a curve I’m not familiar with. Our demo EQ50 came in the Taylor Hall pattern which is a bit more open, where as my curve for the past ten or so years has been the equivalent of an Easton Modano/Forsberg/Zetterberg.

In terms of durability, the EQ50 is still hanging tough after a few months of solid play. It has its fair share of paint chips and scratches, but over all I’m pleased. I typically can get about a year out of my Easton sticks, playing once or twice a week, and the EQ50 seems to be right on par with that. If you don’t have the money to spend on a new stick once a year, this can be an issue. For those like me who love getting new sticks every year, this sort of works out perfectly.

The final point I want to cover is price. The Easton Synergy EQ50 is coming in at a $209.99, which is right on par with the rest of the top line sticks from other brands. However, I don’t think enough has changed between the SE16 and EQ50 to keep the stick at that price point. Easton is beginning to face huge competition in the stick market from companies like Bauer, and keeping a top of the line stick beneath the $200 price point would be a huge achievement.

Overall the EQ50 is a great stick. It’s going to be really familiar for Easton fans, and help you get a lot of power into your shots. If you’re looking to pick up a Synergy EQ50 for yourself, head over to Ice/Inline Warehouse. You’ll be able to grab either the grip or clear version for $209.99, and enjoy free 2-day shipping on that item as well. If you have an EQ50, let us know your thoughts on the stick in the comments below.