As a rec league player, it shouldn’t be unreasonable to expect quality performance from affordable hockey sticks.  With the Warrior AK one piece hockey stick, Warrior looked to incorporate everything that a rec league player desires – a durable work-horse attitude along with top end materials and good all-around performance for an affordable price tag. I’ve used this stick for a handful of games and practice sessions and so far Warrior has delivered on those intentions.

I first started looking for a new twig a few weeks back when my then current stick, an Easton S17, formed a huge crack down the middle of the blade. Honestly, I expected a bit more out of a $200 hockey stick in terms of performance and durability. Instead, I got a stick that was wildly inaccurate on both wrist shots and slap shots and underperformed on durability as pieces of the stick began rattling around internally after only a few games of use. The only saving grace of that stick was the light weight, which provided a great feel for the puck while stick handling, a very important feature for roller hockey where the puck is much lighter.

So when I set out to buy a new stick, I knew what I was looking for. Accuracy and stick handling ability were high priorities, but I definitely wanted something durable. I’m a rec league hockey player. When I pay $150-$200 for a stick, I want something that will last and give me my money’s worth. After looking around at my local hockey shop and online, I finally settled on the Warrior AK.

The Warrior AK one piece hockey stick is a mid-level composite that offers some of the high-end performance and materials found in Warrior’s stick line for an affordable price of $149.00.

Aesthetically, the stick looks mysterious with a dark black and grey motif with simple, yet edgy graphics and logos – a very different schema than some of Warrior’s other loud, brightly colored products. One of the unique features of the AK is the stick’s finish, which eliminates the traditional glossy finish in favor of a flat matte finish that Warrior refers to as a Velvet Grip. This actually provides a unique grip for the stick that isn’t too “grippy” or rubbery like sticks from some other manufacturers. For someone who doesn’t like a lot of grip on their stick, the Velvet Grip definitely offers a low-key level of grip for your hands.

As primarily a defenseman, accuracy and release are very important for me to be able to get a shot away quickly and put it on net. I’m not going to say that this stick has improved my accuracy, but it’s definitely back at the high level that I expect from myself that the S17 didn’t provide. What has really impressed me, however, is the stick’s quick release. I’m shooting some of my fastest slapshots ever with the Warrior AK with a noticeable difference in how quickly the puck releases from the stick with no loss in accuracy. I’m still able to place my slapshots where I want them, but the quicker release allows me to do it faster.

For you forwards, you’ll be impressed with the Warrior AK’s performance on wrist shots in close-range situations as well. The solid build of the stick helps me to get shots up high quicker and with more ease. I’m continually able to aim top shelf with less effort than my previous S17 required.

Stick handling was about the only place where the S17 excelled thanks to its extremely light weight. At 487 grams, the AK is nearly 70 grams heavier than the S17, but still lighter than most other mid-level composite hockey sticks, which gives the AK an advantage for its price range. But honestly, 70 grams is a big difference in roller hockey. A combination of the construction of the blade and the excellent weight distribution of the stick results in a good feel for the puck, but not as good as some of the lighter, higher end sticks. My stick handling has been good for the most part with only a few mishaps thinking I had better control of the puck than I did. Only once did this result in a serious turnover recently in our recent Semi-Finals playoff game 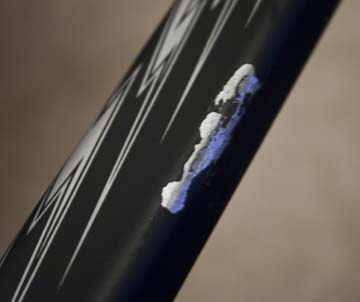 One of the reasons I bought this stick was for the durability. Described as a work-horse that can take a beating, I expect to be able to really put this thing through the wringer and get a good life span out of it. The stick feels solid in your hands, it just feel durable whereas some other light-weight sticks feel like glass ready to shatter at the first good slash. Well, I took a good slash the other night right to the middle of the shaft and the Warrior AK didn’t flinch.

However, I have noticed that the Velvet Grip finish seems to be coming off at a rapid pace, exposing the underlying layer of the stick. Pretty much any semi-decent slash to the stick has resulted in a chunk missing from the shaft. Check out the picture to the left to get a better idea of what I’m talking about. I’m curious to see how this will effect the durability of the stick in the long run. It could be more surface damage than anything, so this is definitely an issue I will keep an eye on in the future.

Overall, I’ve been impressed with the Warrior AK. So far it has displayed great all-around performance in all aspects, including improved accuracy, a faster slapshot and a noticeably quicker shot release. The weight distribution is excellent compared to some other sticks in the same price point and durability hasn’t been an issue yet after a few good hacks to the shaft, but I’m curious to see if it becomes an issue in the future. For only $149, so far this stick offers a great value in terms of performance for not a lot of money.

Keep checking back at www.hockeyworldblog.com in the coming weeks for updated reviews of the Warrior AK! And be sure to check out our reviews on the Easton Synergy EQ50, the Battleaxe BX10 and BX7 and the Blue Ice Nano Pro as well!

Interested in purchasing the Warrior AK? Head over to Ice Warehouse to pick up a Warrior AK one piece stick for $149.00.