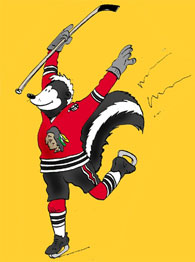 The Chicago Blackhawks had a remarkable season last year winning the Stanley Cup. A team that came out of nowhere to take it all. This year though, despite being early, seems to be a little different.

The Blackhawks at the surface are off to a decent start. They currently sit in 5th place among the Western Conference and 3rd in the Central Division. Dig a little deeper though and you start to see the team for what they are. The Blackhawks have played an average of 4 more games than the competition within the West. There are 4 teams that are within 2 points of catching them, and those teams have 4 games in hand. One of those teams are the Columbus Blue Jackets, 7-3-0 in their last ten and a division opponent.

The point being made is the Blackhawks, despite being in 5th place currently, are a struggling team. They most likely will be leap frogged down to 10th or 11th spot after the other teams catch up. At what cost do the general managers wish to go for the Cup? General manager Stan Bowman was praised last year for taking the team all the way. How will the fans treat him this year if the returning Stanley Cup Champions cannot even make the playoffs?

The season is young, I know this, I just am glad I am not a Blackhawks fan. With the Nashville Predators, San Jose Sharks and the Colorado Avalanche still yet to be in a playoff spot,  I do not think the Blackhawks will make it to the playoffs this season. As a fan, I would be disappointed if my GM went for a one trick pony instead of a constant contender each year.

How would you feel if your team won the Cup then the next year did not make the playoffs?