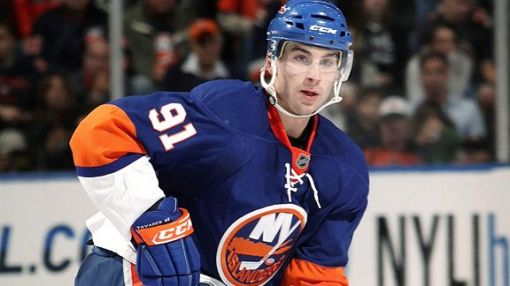 The New York Islanders are continuing to work with a young squad, spending much of the past decade rebuilding their team. This season, we should see tremendous growth out of the 2009 first overall draft pick, John Tavares. He started the 2009-10 campaign on a roll, and finished strong as well. Over the last 8 games of the season, he tallied 11 points. Throughout the middle of the season, however, Tavares struggled. As he develops and gets better, so will the Islanders.

To compliment Tavares, the Islanders have brought back 30 goal scorer Matt Moulson to play on his left wing. On the right wing will be Kyle Okposo. He put together a nice season last year, picking up 19 goals and 52 points, but is still only 22 years old. Okposo’s numbers have increased in each season with the Islanders, but with another year of experience under his belt, and playing alongside Tavares and Moulson, look for Okposo to have a real break out season.

Beyond the top line, the Islanders don’t have too much going on. While their lack of depth will hurt again this season, they have made some big strides. Blake Comeau is another youngster who put together a nice season last year, putting up 35 points in only 61 games. If he stays healthy, he’ll be a nice threat on the 2nd line. Additionally, we could see Rob Schremp really have a break out season. He was a highly touted prospect with the Oilers organization, but management didn’t really think he had a shot with the team. Instead, after coming to the Islanders, he put up 25 points in only 44 games, including 5 goals and 5 assists on the power play.

Finally, we have a couple of new additions to the squad. First, Nino Niederreiter, the 5th overall pick in the 2010 draft. He’s a Swiss stud who’s only 17 years old right now. He’ll turn 18 on September 8th, but is said to already have NHL size, and could very well see time with the big boys this fall. Nino has put up good numbers everywhere he’s been, including a 60 point campaign, in 65 games, last season with the Portland Winterhawks of the WHL. Beyond that, the Islanders brought in Zenon Konopka to protect the current and future stars. Konopka bullied his way to 265 penalty minutes with the Lightning last season, and will more than likely have a repeat performance.

The defense continues to build up and add depth, just like the offense, but the 2010-11 line-up still won’t be enough. Leading the way is Mark Streit, one of the better defenseman in the game. He moves the puck very well, and is a star on the power play. Streit ended last season pretty hot, and should pick up right where he left off.

The new guys, James Wisniewski, Mark Eaton, and Milan Jurcina are all experienced defenseman. Wisniewski is the youngest, and has the most potential as well. He’ll see lots of time on the power play, and should have a pretty big impact at that role. Eaton should see time on the power play as well. Both he and Jurcina will pick up more responsibility with the Islanders than they had with their previous teams. Radek Martinek and Jack Hillen will also battle for ice time on defense.

The Islanders have two skilled goaltenders in Rick DiPietro and Dwayne Roloson. However, DiPietro has only started 12 games in the past two seasons combined. His injury troubles have certainly plagued the team, but with Dwayne Roloson on the squad as well, they have two netminders who are capable of holding the number one spot. Expect a strong battle through training camp, and even into the season, for the number one goaltending position. If DiPietro can stay healthy, and regain his old form, he could earn back his position.

The New York Islanders are still in the midst of a rebuilding project, but the situation is definitely progressing. Youngsters like John Tavares, Kyle Okposo, Matt Moulson, and Rob Schremp will lead the way this season, while future stars such as Nino Niederreiter try to make the squad. Doug Weight will also return to add veteran leadership. Unfortunately, the Islanders still lack enough depth to be a true contender this season. A playoff appearance might not be out of the question though if all the pieces fall in to place and the Islanders can add some additional help at the trade deadline.