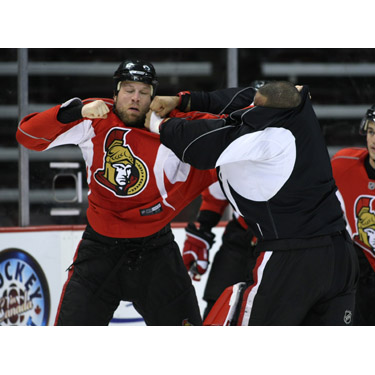 Brian McGrattan and Ray Emery fight during an Ottawa Senator's practice in 2008.

It seemed just yesterday the Ottawa Senators were in the tabloids for pesky players adding more drama than a paternity test on Maury. Well it was not to long ago that Dany Heatley was in the news, but before Heatley, goaltender Ray Emery was the center of attention.

Emery played with the Senators for 5 seasons, starting in the ’02-’03 season. Emery was later let go after the ’07-’08 season. In a nutshell, he was let go for being a cancer to team morale. No other team took the risk on the young goaltender in the ’08-’09 season, forcing him to play oversees in the KHL if he still wished to play at a competitive level.

This year Emery is back, and looking better than ever with the Philadelphia Flyers. Posting a 9-3-0 record with 2.27 goals against average and a .922 save percentage, makes you wonder, “Could there have been something in the water over in Russia?”.

Tonight the Flyers host the Senators for the first time, allowing Emery to take the spotlight and try to shut down his old team. Although a year has passed, I’m pretty certain the wound is still fresh.

The Flyers are currently on a 4 game winning streak, taking them to 9-4-1 overall for 4th place in the Atlantic Division. The Senators on the other hand are up and down with winning and losing, yet 2nd overall in the Northeast Division with a 8-5-2 record. The two teams are only one position apart within the Eastern Conference, so look for a hard hitting fast paced game.

Words of wisdom to those on the Flyer’s bench. If the Senators chase Emery from the net, do not assist with putting on his hat.