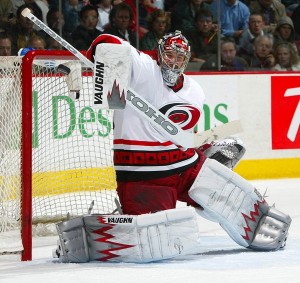 Cam Ward, of the Carolina Hurricanes, is out indefinitely after Rick Nash's skate lacerated his leg

Despite all of the great hockey we have seen in the 2009-10 NHL season so far, one tremendous downfall continues to plague the league. This season, some of the NHL’s most notable stars have been injured, along with dozens of role players as well. In addition to the likes of Alex Ovechkin, Ilya Kovalchuk, Johan Franzen, Daniel Sedin, Simon Gagne, Marc Savard, Sergei Gonchar, and Valtteri Filppula, two more players have now been sidelined with injuries.

First we have Cam Ward of the Carolina Hurricanes. While Ward is having a sub-par start to his season, his career numbers are good. He helped lead the Hurricanes to the Eastern Conference Finals last season where they were swept by the Pittsburgh Penguins. In 2005-06, Ward lead the team to a Stanley Cup Championship in a 7-game series over the Edmonton Oilers. He went on to win the Conn Smythe Trophy as MVP of the playoffs as well.

Against Columbus, last night, Cam Ward’s leg was lacerated by the skate of Blue Jacket Rick Nash. Ward left the game and was taken to the hospital. He remained in the hospital Saturday night, and did not make the flight home with his teammates. There is no timetable for his return, so Carolina will be forced to give Michael Leighton the starts in net. Beyond that, they will either have to call up a goalie from their minor league system, or begin to look at possible trade options to provide added depth.

Just as things we’re beginning to look up for the Detroit Red Wings, winning three straight, they took another huge hit. In the second period of last nights game against the Toronto Maple Leafs, Jason Williams suffered a fractured fibula when he lost his balance and fell wrong on the ice. This injury will put Williams out for at least two months. Detroit is already without forwards Valtteri Filppula and Johan Franzen, and another injury obviously hurts the team.

Injuries in Detroit will give players such as Darren Helm, Justin Abdelkader, Patrick Eaves and Ville Leino a great chance to step up and show what they’ve got. The young players bring a tremendous amount of speed and energy to the team, but they have yet to show much on the scoreboard this season. Leino, for example, was considered by many to be in the running for Rookie of the Year honors after netting five goals and four assists in thirteen games when he was called up last season from Grand Rapids.  In fourteen games this season, however, he has two goals and one assist with a minus four rating. If we are to see any more success in Detroit this November, these energy players must begin to produce.