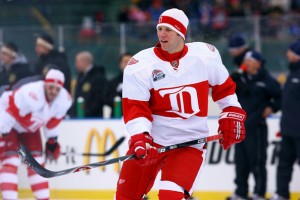 Kirk Maltby has been on a tear (at least for him) to start the season with the Detroit Red Wings. He has collected two goals and two assists in only four games played so far this season. He is also comfortably sharing the team lead in plus/minus with a +3 in those four games. Not too shabby for a guy who has seen quite a drop in production since his effective grind line days back around 2003.

To provide a nice comparison, last season it took Maltby until December 4th to notch his fourth point of the season. That was his 24th game of the season. In addition, there was not a single time all season where he was a +3.

So what can we attribute this resurgence to? Are those 50 goal scorer hands from juniors finally coming back? Is Maltby simply taking advantage of the loss of so many goal scorers in the off-season? One thing is for certain, I wouldn’t pick him up as a fantasy sleeper just yet.

Detroit Red WingsKirk Maltby
← Previous Story From Phoenix with Love
Next Story → Is the love story between the media and the Penguins finally over?