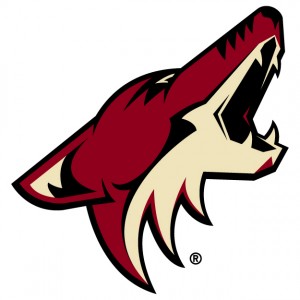 The Phoenix Coyotes are hoping to revitalize their fan base with a chance for fans to win free tickets if the Coyotes win on designated nights.

In a marketing strategy, the Phoenix Coyotes have opted to offer free tickets to fans if the team wins on specific nights. The promotion, dubbed “We win, you win!”, will see that 5 selected games if won, could provide fans with free tickets.

The Coyotes, who filed for bankruptcy in the offseason due to declining sales and the inability to turn a profit, is looking to regain their fan base. The marketing theme is called, “Join the pack!”. According to the team’s press release, the name derives from, “For the last few years, we have referred to ourselves as ‘One Pack’ to signify the unity within the Coyotes organization,” Phoenix Coyotes President and Chief Operating Officer Douglas Moss states. “In addition, Head Coach Dave Tippett, in his first meeting with the team, encouraged the players to embrace a ‘Pack’ mentality on the ice.”

Moss continues on saying, “Now more than ever, we believe it is important to show our appreciation to our great fans. We want everyone throughout the state of Arizona to feel as though they are a part of the Coyotes family and to know that we are committed to providing them with a great product that they can be proud of. Our ‘Join the Pack’ promotion also serves as a call to action, encouraging people to support the team by purchasing tickets and experiencing Coyotes hockey live at Jobing.com Arena.”

For the home opener, the Coyotes sold out by reducing upper bowl tickets to only $15 usd a ticket. Everyone in attendance received white T-shirts and pompoms for the game, promoting a, “Welcome Back Whiteout” theme.

Many fans are critical of the teams marketing strategy, some feeling it is a lost cause. The team currently is leading the Pacific Division within the Western Conference with a 4-2-0 record. The season is still very young, and anything could change at any moment as the team has perhaps one of the toughest divisions within the league.

To clarify the details of the “We Win, You Win!” promotion, vouchers that may be redeemed for a free ticket in the future to Jobing arena are only given to those who are in attendance on one of the given 5 nights. The Coyotes are hoping many fans will purchase the tickets on the selected nights providing a source of revenue and to strengthen the fan base, yet offering the incentive for fans the possibility of receiving two tickets for the price of one if the Coyotes pull out a victory.

The 5 selected games are as follows: