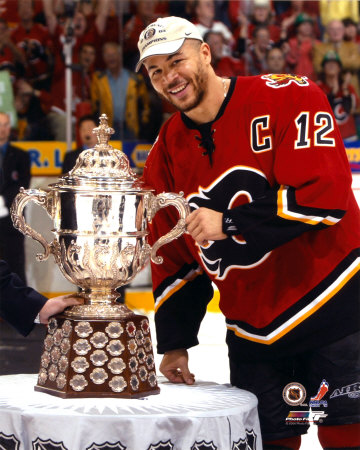 If Jarome Iginla wants to hold the Clarence Campbell Bowl again, he might have to do it in a different uniform.

The Calgary coaching carousel took another spin for the fourth time in five seasons at the end of another disappointing 2009 season. Out was Mike Keenan, and Brent Sutter is in. Sutter coached New Jersey last season, but resigned to be closer to his home in Red Deer, Alberta. That retirement/resignation didn’t last long when his brother Darryl, the GM of the Flames, came calling with an opening behind the bench.

The coaching Sutter has the task of guiding the team to its first playoff series victory since they went to the Stanley Cup Finals in 2004. The Flames have advanced past round once (in 2004) since winning the Stanley Cup in 1989. For those scoring at home, it means they have been eliminated after the first round in 10 of the 11 years they have made the playoffs since 1989.

The issue the Flames have isn’t talent, but it’s getting that talent to perform more consistently when it mattered. On defense, they have one of the most physical units in the league with heavy hitters Jay Bouwmeester, Dion Phaneuf, and Robyn Regehr. The defensive unit needs to keep its physical presence at the level it’s been, but not allow 248 goals like it did last season. The defense should be better because Sutter coaches a more defensive system in comparison to Keenan. The one positive the blue liners had last season was their 83.4 percent penalty killing rate, good for fourth in the league.

Up front, Jarome Iginla is still the workhorse of the offensive attack. He’s played 81 or more games in five of the last seven seasons. His goals went down to 35 from 50 in comparison to the 2008 season. But his points did increase from 48 to 54. The big problem was his plus-minus rating. In 2008 he tied a career-high rating of +27, but in the same number of games last season he was a disappointing -2. That has to change if he wants to advance past the first round of the playoffs for the second time in his career.

The X-factors the Flames will have is who will replace the 82 points Mike Camalleri had last season. Counted upon to create more offense will be Olli Jokinen, Daymond Langkow, Craig Conroy, and Phaneuf. All four must score between 55-60 points to make up for the lost scoring. Younger players who have to contribute a little more than last season will be Rene Borque, David Moss. Both are expected to reach the 45-50 point plateau.

In goal, the Flames must have goaltending help for Mikka Kiprusoff. Kiprusoff has played 74 or more games each of the last four seasons. He has a lot of mileage in the goal crease, which has led to a significant decrease in performance in the playoffs. Each of the last two seasons, his GAA has increased by over .5 in the playoffs vs. the regular season. Backup Curtis McElhinney has to improve his 1-6-1 record last season and record some more wins to keep Kiprusoff fresher for the playoffs. In addition the defense has to perform the same in front of McElhinney as it does in front of Kiprusoff as it saved its worse performances for when the backup was in goal.

Like every season, the Flames have the potential to contend for the division title. If the defense and goaltending starts the season hot, they can fight for one of the top-three seeds in the west. Most likely, they will likely fall to the third-sixth seed. The challenge however, is if Sutter can put together a playoff run and earn the respect of the team in the locker room.