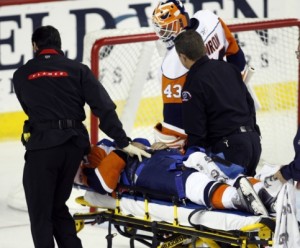 New York Islander's Kyle Okposos is carried off on a stretcher after being hit by Calgary Flame's Dion Phaneuf.

Hockey season is back with the cool air within the rink, the sounds of skates grinding, red lights lighting, and of course, big hits.

Last night in a preseason game with the Calgary Flames hosting the New York Islanders, Dion Phaneuf of the Flames laid a crunching hit on Kyle Okposo. Okposo, who was later carried off on a stretcher, laid on the ice for over 6 minutes.

Immediate after the hit, a scrum unfolded, with Islander teammate Pascal Morency launching over the boards, only to be wrestled down by the 6’3”, 214lb Phaneuf. Even Islander’s newly acquired goaltender Martin Biron got in on the action, but like his teammate Morency, ended up on the bottom of the scrum.

The hit has stirred up some controversy, as the argument of Dion Phaneuf leaving his feet to execute the hit is in question, as well as if Pascal Morency partook in a line change or jumped off the bench. A link to the video is provided here as you may be the judge.

Later throughout the game the Islanders targeted Phaneuf some more, yet he never dropped the gloves. Some may say he was a coward, to make a hit and not drop the gloves is backing down. Some may say keep your head up and the hit would not have happened.

A suspension to Morency may be issued, and perhaps a fine or so to Phaneuf.  Regardless, it seems the Islanders are continuing from last season, and that being on the short end of the stick.

Keep your head up hockey fans and let’s enjoy more games, and more hits, to come.