Last season, Atlanta played its best hockey when it was already eliminated from playoff contention when it won 12 of its final 18 games. Atlanta hopes to use the strong finish last season to continue early this season.

This franchise has had superstars Ilya Kovalchuk, Slava Kozlov, Marian Hossa, and Dany Heatley in its 10-year history and has manged to make the playoffs only once when they won the Southeast Division in 2007. The one constant throughout the Thrashers history is GM Don Waddell, and he needs to start showing improvement with this franchise before his seat will start to become hot. 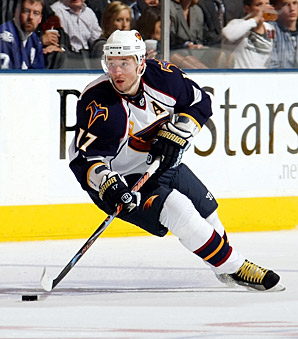 Will Atlanta trade Ilya Kovalchuk to a contender at the deadline?

Kovalchuk is perhaps the best player on a bad team in the NHL. Last season he finished fourth in goals with 43 and tied for sixth with 91 points. In the final year of his contract, Waddell has to give him the proper help needed to carry the team into the playoffs. He wants the same success Russian countrymen Kozlov, Sergei Federov, Evgeni Malkin, and Pavel Datsyuk have had as all three have had their names on the Stanley Cup. Kovalchuk is also in the final year of his contract. Expect him to be traded at the deadline if Atlanta isn’t in playoff contention.

Waddell has given Kovalchuk help on the first line with the addition of Nik Antropov on the right wing. Also coming from Toronto was defenseman Pavel Kubina.

Kubina’s main job is to anchor a defensive unit that was one of the worse in the league last season. They allowed 280 goals, the second-worse amount in the NHL. Defense also has to be a team effort as the forwards have to play more two-way hockey and goalie Kari Lehtonen has to be more consistent. While the team in front of him did let him out to dry several times during the season, Lehtonen has to take the defense on his back and not allow as  many soft goals as he had.

Head coach John Anderson also has the task of improving the special teams. While they were a respectable 11th on the power play, Atlanta was 29th in penalty kill at 76 percent. Atlanta also surrendered 13 shorthanded goals, which is not acceptable to any NHL team. Again, this goes back to defense.

With their future prospects, none of the top-10 prospects ranked by The Hockey News are defensemen. Having six centers, two wingers, and two goalies isn’t the outlook Thrashers fans want to see of a team that’s as deficient on defense as they have been.

Overall, don’t expect Atlanta to do much this season. They are still 1-2 solid defensemen away from being a contender, but isn’t big spenders in free agency. Lehtonen has to be more solid in goal and not become as injury prone as he has been. A team with low attendance (29th in the league averaging 14,626 per game) in a non-hockey market, expect Atlanta to finish between 13th and 15th in the Eastern Conference.