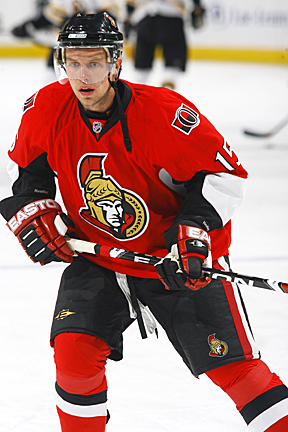 After false reports surfaced yesterday of a possible deal that would send disgruntled Sens sniper Dany Heatley to the Sharks in a three-way deal that also included the Las Angeles Kings, it was officially announced today that the San Jose Sharks have acquired Heatley and a fifth round draft pick from the Senators in exchange for Milan Michalek, Jonathan Cheechoo and a second round draft pick.

”I’m excited obviously, I’m excited to be a Shark,” Heatley said. ”I want to thank everyone in Ottawa, the organization the fans, and the city. I had a great four years here (and) I’m happy to move on.”

After a President’s Trophy-winning season last year, the San Jose Sharks were ousted early from the playoff picture by the Anaheim Ducks. For San Jose, the scenario was all too familiar as the Sharks have been a Western Conference powerhouse for several seasons but have failed to make an impact in the post season. Acquiring Heatley will give San Jose a consistant 50-goal scorer to team up with skilled center Joe Thornton – a role many thought Cheechoo would fill after a productive campaign in 2005-06 where Cheechoo chipped in 56 goals for 93 points. His production has slipped with each passing year, however. Last season with the Sharks,  Cheechoo only managed 12 goals and 29 points in 66 games.

A change of pace may help Cheechoo regain his scoring form, and the addition of Milan Michalek will certainly help the secondary offense of the Senators, a team that has all-too often relied on the powerhouse trio of Dany Heatley, Jason Spezza and Danny Alfredsson in the past.

As far as Fantasy implications go, Joe Thornton has contributed 60 or more assists in each of his last four NHL seasons. Expect Heatley to be on the receiving end of most of the assists this coming season.