The Florida Panthers gives neither feeling of excitement nor any other feeling at all when thought of, but perhaps that is expected of a team who has not made the playoffs since 1999. Nonetheless, last season the panthers were only one spot short of the playoffs, only to be edged out by the Montreal Canadiens, and hope to build upon the improvement. 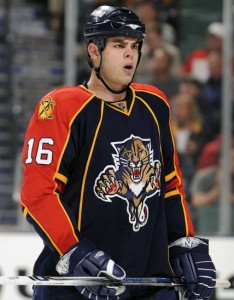 The Panthers are as confused as Nathan Horton on his scoring touch but hope this season it comes back to him.

In the off season, the team made a few moves but none stick out more than the swapping of defense between the Calgary Flames; Jay Bouwmeester from Florida in exchange for Calgary’s Jordan Leopold. The trade is questionable seeing that Leopold has a rather long injury list, but with the additions of mixed aged defensemen Nick Boynton, Steve Emminger and Ville Koistinen, the team should be just fine.

The teams other major addition is that of goalie Scott Clemmensen from the New Jersey Devils. Clemmensen last year filled in for Martin Brodeur during is surgery recovery and put up some excellent numbers; 25-13-1 record with a .917 save percentage and a 2.39 goals against average. The goalie spot still could belong to Tomas Voukoun, but expect it to be taken rather quickly by the Panther’s new addition.

Last season the team was led by young fellas Stephen Weiss and David Booth who combined for 45 goals, 76 assists which totals 121 points in the 150 games between them. Veterans Cory Stillman and Steven Reinprecht look to add leadership and points as well, and the team is looking to jump start under achieving Nathan Horton. With the addition of some defense, a new goalie, and with the rest of the roster, it truthfully is a crap shoot if they will be competitive or not in the Eastern conference.