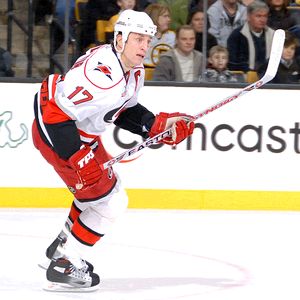 Rod Brind'Amour, who played in 80 games last season, has to improve his -23 rating if the Hurricanes expect to be a serious contender in the Eastern Conference.

The story with the Hurricanes going into this season is can they build on the momentum created at the end of last season? Every time they seem to take one step forward (Stanley Cup Finals appearance in 2002, winning the Stanley Cup in 2006), they have taken two steps backward (missing the playoffs in 2003, 2004, 2007, and 2008). The Hurricanes used a change in head coaches to surge to the playoffs, but upsetting of New Jersey and Boston in the first two rounds before bowing out to Pittsburgh in the Eastern Conference Finals.

On offense, this team will come and go with how center Eric Staal plays. If he can top the 40-goal season he had last season, this team could challenge Washington in the Southeast Division. If he gets injured or fails to score enough (Carolina went 7-1 in the playoffs when he scored and 1-9 when he didn’t), this team could be surpassed by Florida or Tampa Bay. If you were to say which way they will lean, go with a Carolina-Washington dogfight for the division title.

Staal will get help on the wings with Ray Whitney and Toumo Ruutu. Not many new players were added, but they will enjoy the return of defensemen Aaron Ward, who left the team after the 2006 championship season to play for New York and Boston. Expect Ward to compete for the third defensive paring spots with newcomer Andrew Alberts,  veteran Tim Conboy.

Keeping on topic with the blue line, that can appear to be a weakness for the Hurricanes.  After allowing only 17 goals in a seven-game series in the conference semi-finals against Boston, the defense of Carolina allowed 20 goals in a four-game sweep at the hands of the Penguins.

While the core of their team is young with Stall and goalie Cam Ward, several members of the 2006 championship team is either in or entering the twilight stage of their careers. The group of players over 34-years-old include defensemen Ward and Niclas Wallin, and forwards Whitney, Scott Walker, and Rod Brind’Amour. Things changed quickly last season during the conference finals when they couldn’t stop Sidney Crosby and Evgeni Malkin as their age turned from a positive (leadership and experience) to a negative (age and fatigue).

Look for Joni Pitkanen, Tim Gleason, and Joe Corvo to carry majority of the defensive load while forwards Erik Cole, Matt Cullen, and Chad LaRose will be expected to anchor the second line. For the rookies, expect Zach Boychuk to make the opening night roster. At worse, he will spend most of the season in Albany, which will be better than last season when he made the team out of training camp but returned to Lethbridge of the WHL after two games.

In goal, this is the season that Cam Ward will join the elite goaltenders of the NHL. Working with Tom Barasso, Ward has to take how he played down the stretch and the playoffs last the entire regular season. If Barasso can transfer Ward’s strong play throughout the entire season, consider Ward an outside candiate of the Vezina Trophy.

Overall, this team can shock the Southeast Division and give Washington a good fight, but most likely the Hurricanes will fall between fourth and sixth in the East. What could be working against them if they are in a tight playoff race, seven of its last 12 games beginning March 20 at Pittsburgh are on the road.