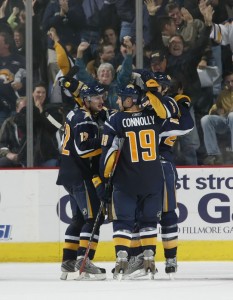 Fortunately for the Buffalo Sabres, they added some grit to their line-up with the off-season signing of veteran forward Mike Grier. Unfortunately, however, this was their biggest free agent signing. Not the best sign for Buffalo and their 2009-10 campaign. To make things worse, they lost their top defenseman in Jaroslav Spacek. He played 80 games in the 2008-09 season and tallied 8 goals and 37 assists, certainly a tough loss.

The biggest question for the Buffalo Sabres this season is the health of Tim Connolly. When he is healthy, boy is he good. Sadly, he has not played a full season in the NHL since 2002-03. Last year, Connolly led the team in plus/minus and finished fourth in points, all while only playing 48 games.

Along with Connolly, the Sabres are hoping for big production for Jason Pominville as well. He had a bit of a down year with only 66 points last season, but fans and management alike are hoping he can regain the form that brought him 27 goals and 53 assists in 07-08.

The list could continue of Buffalo forwards who need to play up to their expectations. A few additional key players include Derek Roy, Thomas Vanek, and Jochen Hecht. All of these players experienced a dip in points last season compared to years prior. If Buffalo wants to be part of the playoff race, they are going to need solid contributions from these guys, along with some of their up and coming players like Drew Stafford and Daniel Paille.

While the defense may have lost a key member, they still have the likes of Craig Rivet, Toni Lydman, and Teppo Numminen to hold down the blue line. Some of the youngsters will really have to step up and help fill the void on the blue line as well. Otherwise, you can probably expect Darcy Regier, GM of the Sabres, to step up and make a trade to give the team a push.

As has been a common theme of late, Buffalo lacks no shortcomings in the goaltending department with former Michigan State Spartan Ryan Miller between the pipes. Miller had one of his best NHL seasons last year posting career bests in both save percentage, .918, and goals against average, 2.53. His solid play in goal is what gives Buffalo their best shot at making a playoff run.

It will be a battle all season long for the Sabres, but if all the pieces fall into place they could make a big impact. No one will oust the Bruins from the top spot in the Northeast division, but look for Buffalo to try and take second in the division and earn themselves a low seed heading into the postseason.