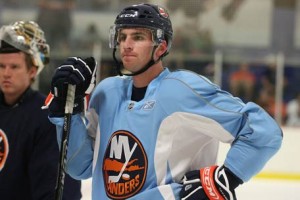 With the number one pick in the 2009 NHL Entry Draft, the New York Islanders selected Jonathan Tavares of the London Knights. The young stud, who will turn 19 on September 20th, was nothing short of a goal scoring phenom in the OHL. This will certainly prove to be helpful for a team which ranked next to last in goals last season.

As we know, however, scoring goals isn’t everything in the NHL. A solid goaltender will help any team improve. Since starting goalie Rick DiPietro continues to fight through injuries, the Islanders spent some money this off-season on a couple solid netminders to hopefully help turn things around.  They initially signed Dwayne Roloson and less than a month later picked up Martin Biron as well, so expect a battle all season long for the number one goalie spot.

While the scoring and goaltending have certainly taken a step in the right direction, the Islanders still have a ways to go on defense. Number one defenseman Mark Streit will be a great help again this season along the blueline, especially on the power-play, but he lacks the support necessary to make a solid defensive corps.

The Islanders are continuing to rebuild around young stars like Tavares and Kyle Okposo, along with some veteran leadership in Doug Weight, but don’t expect them to turn things around overnight. While there will definitely be some improvement in 2009-10, I don’t see them climbing out of a last place finish in the Atlantic Division.