In about three weeks, NHL teams will enter training camp. Players will shake off the off-seson rust in the beginning of the pursuit of the Stanley Cup.

For some players tho, they will continue to skate at their hometown rink, workout at the local gym, and keep sharp in hopes of returning to the NHL. Some have been all-stars, some have won the Stanley Cup, and some have been in the league for years. Here’s the list of unrestricted free-agent players, who as of today, won’t be skating in a few weeks with the logo of a NHL franchise on their chest.

Robert Lang is looking for a new team, any takers?

I’m not sure how many teams will want Lang. Sure he did record 39 points last season, but he missed hearly half the season with an Achillies tendon injury. He turn’s 39 in December, but I’m pretty sure by then some third or fourth line player will have a season-ending injury which can favor Lang.

Chris wrote on July 23 that he was reportedly asking for $5 Million a season to his potential teams. Just like Lang, he was a victim of injury last season. His performance in recent season was as high as 81 points in 81 games two years ago with Calgary to 41 points in 50 games last season. For him to catch on with a team, he must take a short term deal that isn’t much of a cap hit.

Only 28 years old, Bergeron is a very good offensive defenseman. He’s scored double-digit goals twice in his seven-year career, but the primary responsibilities of a defenseman is in his own zone and thats where he struggles. He hasen’t finished a regular season with a double-digit plus-minus rating since 2003-04, when he finished at +13 with Edmonton.

A player that has spent no less than two seasons with any of the six teams in the first 21 years of his career, Schneider has become a journeyman in the twilight of his career. He spent the last two seasons with Anaheim, Atlanta, and Montreal. At 40, he can still be useful on the power play and provide veterean leadership in a way former teammate Chris Chelios did for Detroit. 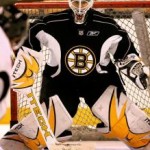 Manny Fernandez is still on the free-agent market

With Tim Thomas solidifying the starting position in Boston, Fernandez was the odd-man out. He is still a manageable, high value #1 goalie for a middle-to-bottom tier team. If he wants as much money as he desires, he must play more than 44 games in a season. The only time he’s played over 44 games was 2005-06 when he appeared in 58 games for Minnesota.