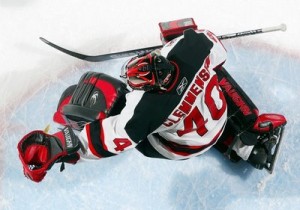 Clemmensen had one of the best pad, jersey and helmet aesthetic combos last season with the Devils.

The Florida Panthers have been receiving some publicity lately, mainly focusing on their off season acquisition of goaltender Scott Clemmensen. Clemmensen signed as an unrestrictive free agent for 3 years coming from the New Jersey Devils after a remarkable season. When all hopes were lost with the news of Martin Brodeur missing the majority of the season due to surgery to repair a torn bicep muscle, Clemmensen received the green light. In previous years he had short game stints in the NHL to fill in, to be expected behind Brodeur, but never has had constant starts. Clemmensen posted a 25-13-1 record, .917 save percentage and a 2.39 goals against average. Oh, he also had 2 shutouts.

I never recommend picking up a goalie in the early rounds seeing that it is a crap shoot what team will be winning out of the gate or not, but keep Clemmensen on your radar as he may be a diamond in the rough in the later rounds. It will be interesting to see how he fares in Florida with the different players in front of him, but something tells me he will be a consistent backup goalie on your roster, and perhaps even surpassing your starter.