Time for sniper to be a team player 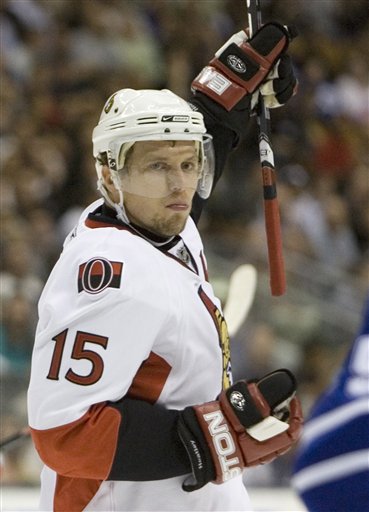 The Dany Heatley saga has been anything but professional since the onset of the storyline right before the NHL draft in June. Claiming that he was unhappy with the direction of his role with the Ottawa Senators under new head coach Cory Clouston, Heatley reached out to Ottawa management and asked for the trade after only one year of his new 6-year contract worth $45 million. From the very beginning, however, this whole ordeal has been a mockery of professionalism on the part of the Heatley camp.

The first mistake made was Heatley’s corner publicly announcing that they had filed a request for a trade, which hamstrung Ottawa from the get-go. Instead of being able to queitly shop the scoring left winger and get a marginal return, Senators GM Brian Murray was put in a tough spot with the public announcement. Now that teams know Heatley is disgruntled and wants out of Ottawa, since other GM’s know that Ottawa is looking to deal, they aren’t willing to give the return that should be given on a sniper like Heatley. Instead, it becomes an issue of how little you can give away and still get Heatley on your roster in return.

The other issue became persuading Heatley to lift his no-trade clause, which Heatley said he would only do for certain clubs and gave management a list of preferred destinations, many of which could not offer a real return on Heatley in a trade, nor could they absorb his tremendous salary.

The only team to really step up with a legitimate offer was Edmonton, whose offer seemed remotely fair given the circumstances. The Oilers offered up forwards Dustin Penner and Andrew Cogliano along with defenseman Ladislav Smid. Although Penner has been a huge underachiever since signing an offer sheet with Edmonton in 2007, the big forward may have benefit in Ottawa from playing with other high-caliber players to take some of the pressure off of his own shoulders. However, Heatley decided against this trade and refused to waive his no trade clause. That didn’t stop Edmonton from courting the prized winger, until recently when Oilers GM Steve Tambellini announced that the Oilers were no longer interested in Heatley’s services.

“We gave ourselves an allotted amount of time internally … to explore every opportunity to see if there was something that would work — it didn’t. It’s time for us to move on. We’re very comfortable with that,” Tambellini said. The Oilers GM worked for over a month trying to persuade Heatley to come to Edmonton.

So, let’s sum up the scenario. Heatley demands trade, but wants to dictate where that trade leads him according to his own personal agenda. But the actions out of his camp from the very beginnings of this saga made it nearly impossible for Ottawa to get the type of return that they should get for a forward able to score 50 goals and is in the prime of his career. And when Ottawa did get a legitimate offer, Heatley refused to waive his no trade clause because the destination didn’t fit with his personal agenda, even though any team who would fit his agenda doesn’t have the cap space or isn’t willing to give up first-or-second tier forwards in return for a prima donna like Heatley. It sounds like Heatley needs to suck it up and be a team player.

My suggestion for Ottawa? Keep Heatley. Don’t trade him. Let him know that he brought his current situation upon himself and that he is going to play in Ottawa this coming season because of it. Who knows, with the addition of Alex Kovalev to the Senator’s roster, Heatley may feel differently come October when some of the pressure may be lifted off of the shoulders of Heatley. But, if Heatley doesn’t want to play? Bench him. I understand that Heatley makes way too much money to bench, but he needs to understand that come trade deadline time, nobody will want to add an underachieving scorer whose heart and worth ethic just aren’t there. At this point, if Heatley wants to be traded somewhere that fits his agenda, he needs to work for it. It’s time to step up to the plate and be a professional for once in this long, drawn out saga. It’s time to sit down, lace up your skates, and play hockey.