Many hockey fans will continue to remember the excitement of the 2009 Stanley Cup Finals for years to come. The Detroit Red Wings battled their way through a tough Stanley Cup Playoffs only to fall one game short of becoming the first back-to-back champions since they had done it 11 years prior. In a pivotal game 7, the Red Wings ran out of gas and eventually conceded to the NHL’s favorite marketing tool, the Pittsburgh Penguins. All hockey fans remember the moment as Sid the Kid raised the Stanley Cup for the first time. How could we forget? It happened less than two months ago. 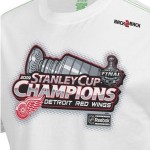 Back to Back Stanley Cup Champions 2009?

Some have forgotten, however, and they are currently designing apparel for Reebok Hockey. While browsing through the fan gear on the Reebok Hockey site, you will eventually come across this stunning t-shirt. The front of the shirt shows a Red Wings logo along with the words “2009 Stanley Cup Champions.” Uh-Oh!

Here is a link to the product itself. The caption on the page reads “Congratulations Detroit Red Wings on back-to-back Stanley Cup victories! Get your historic tee and commemorate another incredible season.” Historic indeed.

Any Red Wings fan still having a hard time with that loss, still not willing to admit their team fell short on home ice, its okay. Reebok has you covered. Wear this shirt and wear it proudly. Show off that winged wheel and continue to live the dream as though Sidney never laid a hand on the Cup. We support you and your quest to keep the dream alive.