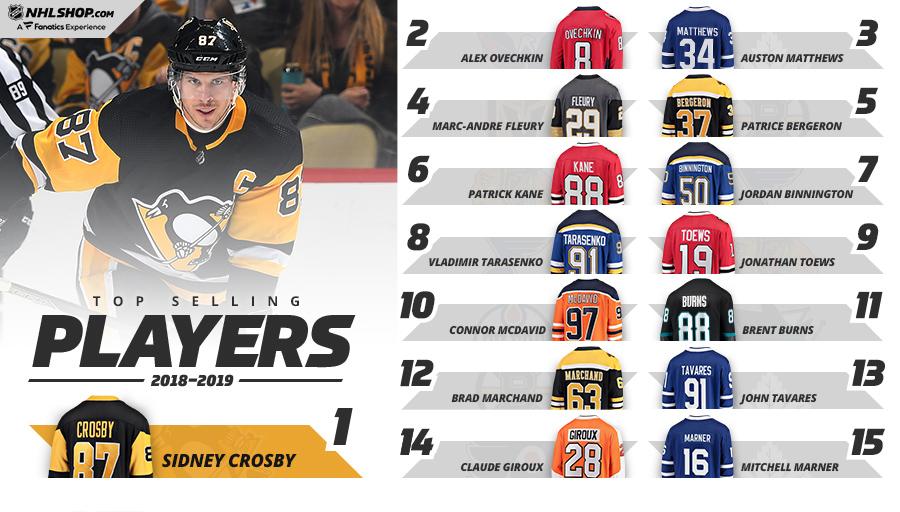 The NHL announced yesterday their list of the best selling jerseys from the 2018-19 hockey season. Coming in as a surprise to very few people, Sidney Crosby was the top selling jersey of the season.

What did come as a surprise, however, was the impact that rookie goaltender Jordan Binnington had. Obviously he had an amazing season and capped it off with a Stanley Cup Championship, but who would have guessed that he would outsell a star like Connor McDavid?

Speaking of McDavid, that was a surprise of it’s own as his jersey was only the 10th best selling of the season. He was outpaced by Patrice Bergeron and Vladimir Tarasenko, among others, which certainly caught me off guard.

Perhaps unsurprisingly, among the top 15 best selling NHL jerseys, the Stanley Cup winning St. Louis Blues were represented two times with the aforementioned Binnington and Tarasenko. The Boston Bruins were also represented twice with Bergeron and Brad Marchand. The Chicago Blackhawks had two best sellers with Patrick Kane and Jonathan Toews. Meanwhile, the Toronto Maple Leafs led the pack with three of the top selling jerseys which belonged to Auston Matthews, John Tavares, and Mitch Marner.

Check out the full list of the best selling NHL jerseys from the 2018-19 NHL Season below: