With only six months remaining until the 2017 NHL Draft in Chicago, it’s about time to start looking at some of the top ranked prospects if you haven’t already.

The 2017 draft class has long been lead by Nolan Patrick. Despite missing time to injury this season, and only playing in six games, Patrick managed to maintain his hold on the top spot in the 2017 NHL Draft rankings. In his six games this season, the Brandon Wheat Kings center has tallied four goals and five assists. However, his numbers last season were incredibly impressive as he scored 41 goals and 61 assists (102 points) in only 72 games played. Patrick added on to that with 30 more points coming off of 13 goals and 17 assists during 21 playoff games.

Swedish defenseman Timothy Liljegren holds on to his spot at number two in the rankings. Liljegren is currently playing hockey in Sweden where he is viewed as offensive minded and is often compared to countrymen Erik Karlsson.

TSN’s Bob McKenzie had this to say about Liljegren:

Scouts say his offensive game is far more developed than his defensive game. He is an elite skater, both in terms of speed and agility, and adept at running a power play. He is seen as both a puck mover and an offensive point producer. No one is suggesting he’s the next Erik Karlsson, not by any means, but scouts say he has some of the same qualities and, therefore, has the potential to be projected as a possible top pairing defenceman in time.

Moving up a few spots in the January rankings is right-wing Nico Hischier. The Swiss-born forward currently plays for Halifax in the QMJHL. Hischier currently has 23 goals, 25 assists (48 points) in only 31 games played. He also played incredible for Switzerland in the World Juniors tallying four goals and seven points in five games played. Hischier was last ranked at number eight before the latest rankings were released.

Other names to keep an eye on in the rankings are fourth ranked Gabe Vilardi and fifth ranked Owen Tippett. Vilardi appears to be more of your cornerstone center whereas Tippett is more of a pure goal scorer with 29 goals in only 36 games with the Mississauga Steelheads this season.

You’ll also want to keep an eye on Casey Mittelstadt who is currently ranked sixth and is playing high school hockey in Minnesota this season. He returned to Eden Prarie in order to try to win the coveted Minnesota High School State Championship. Beyond that, there is also Callan Foote, son of former Colorado Avalanche defenseman Adam Foote. Cal is a big body at 6’4″ and 210 pounds. He’s also a right-handed shot, which is highly coveted in the NHL. Finally, another familiar name is Matthew Strome. Yes, there is yet another Strome brother, and they are beginning to seem a lot like the Staal family. Strome is currently ranked #21 in the rankings. 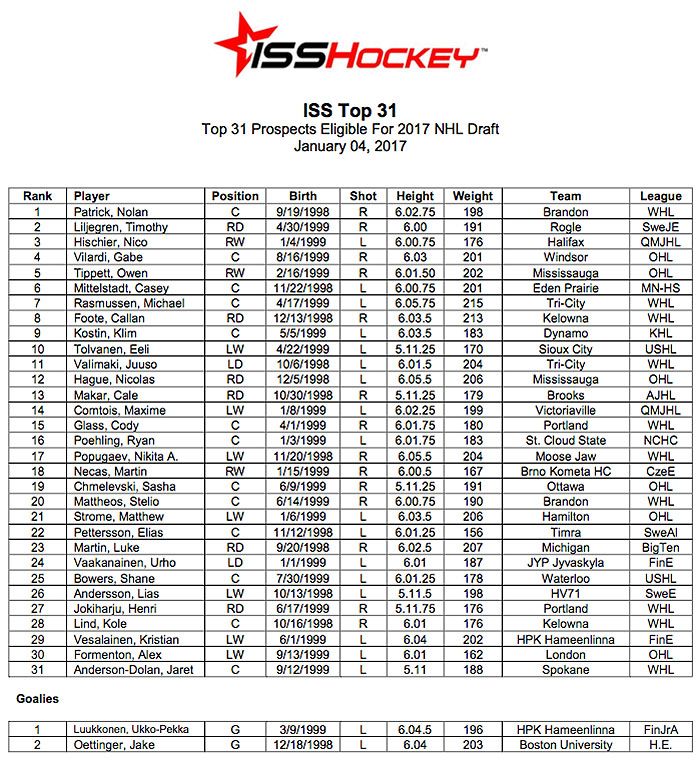