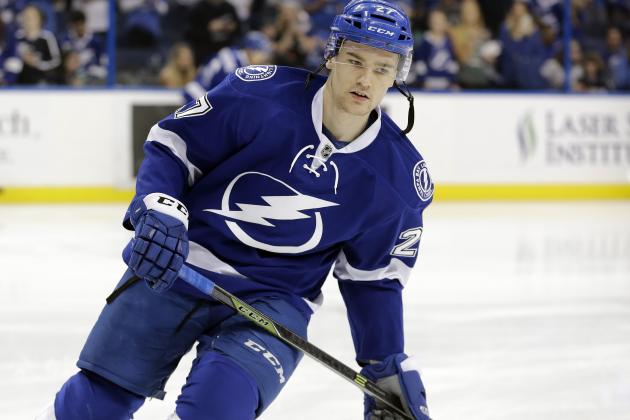 It looks like Jonathan Drouin will finally get another shot with the Tampa Bay Lightning.

Drouin, the 3rd overall pick in the 2013 NHL Draft, has been at the center of controversy this year. After failing to make the NHL clubs roster long term this season, he demanded a trade. To make matters worse, the trade demand was made public via his agent.

Lightning GM Steve Yzerman chose to retain his young star through the trade deadline after not receiving the right offer.

After failing to report to the Syracuse Crunch, Tampa’s AHL affiliate, Drouin was suspended from the team.

He finally decided to return to the lineup, and has played in a total of 17 games this season for the Crunch. His numbers have been respectable, but certainly not mind blowing. Thus far, Drouin has contributed 11 goals and 2 assists in 17 games played.

With Steve Stamkos out for the foreseeable future, and Ryan Callahan banged up, the time was right for Drouin to return to the lineup. He will be counted on to fill a huge void for the Lightning, and could help to increase his trade value at the same time.

How do you think Jonathan Drouin will fare in his return to the Lightning lineup? Will he live up to the potential and stick with the Lightning? Or will this be his last run in a Lightning sweater?