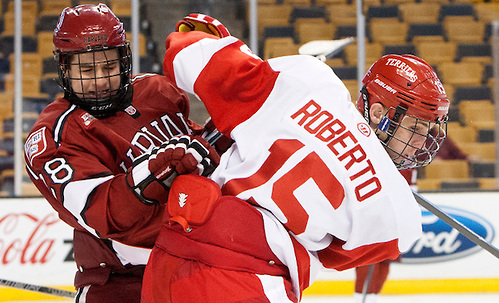 The suspension of a Boston University forward due to gambling related activity could go much deeper than originally suspected, according to College Hockey News.

The publication reported that Nick Roberto, a junior forward for BU, was suspended earlier this season and will remain suspended for the remainder of the year due to gambling activities he participated in last year. However, sources say that Roberto wasn’t the only BU player involved, although they are no longer with the hockey program.

Other sources have indicated that players from others teams were involved, too.

In a statement released today, the University confirmed that Roberto will not play again this season, but could not indicate why.

“Beyond confirming that Mr. Roberto will not play for the Boston University hockey team this season, federal privacy laws prevent us from discussing his status.

“However, we can say that several months ago, we heard rumors that a BU hockey player had engaged in gambling. Although the rumors did not involve gambling on either college or professional hockey games, we nonetheless immediately conducted a thorough investigation and turned the results over to the appropriate authorities at the NCAA. Based on that investigation, the NCAA made its own findings and took remedial action, and we would refer you to that organization for further information.”

NCAA by-laws cite that a player who is found gambling on any sporting event, amateur or pro in any sport, via a “bookie” or the Internet, faces a minimum one-year suspension.