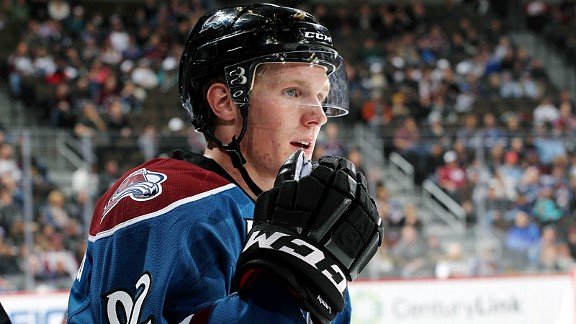 The Colorado Avalanche’s last couple of seasons have been about as up and down as they come. After finishing first in the Central Division in 2013-14, many expected big things from a team with an impressive young core. However, last season that fantasy came crashing down as the team finished dead last in the Central and missed the playoffs. So what can we expect from the Avs this season?

The answer likely lies somewhere in between.

One of their weak points last season was defense, where the team allowed an average of 2.72 goals per game. Part of that was due to the fact that Erik Johnson, their top defenseman, was limited to just 47 games due to injuries. But the offseason addition of Francois Beauchemin will help shore of some defensive deficiencies, and provide another veteran presence on the blue line, and a full (and healthy) season from Johnson will give the team a much-needed boost.

On offense, the team needs more production from youngsters like Matt Duchene and Gabriel Landeskog, who both took dips last season after career years the season before. Duchene specifically took a severe step back from his 70-point 2013-14 season by posting just 55 points last year—a stat that needs to improve if the team expects any level of success in 2015-16.

And, while Ryan O’Reilly is gone, the team added offensive depth with the acquisitions of Mikhail Grigorenko and Blake Comeau. The Avs will also get a boost if Nathan MacKinnon, the former number overall draft pick, can stay healthy. Rookie power forward Mikko Rantanen also comes into the league with high hopes and could provide a boost for the Avalanche.

Goaltender Semyon Varlamov had OK stats last season, with a 2.56 goals against average and a .921 save percentage—but the team needs more than mediocrity from their netminder. Varlamov needs to steal a few games for the Avs if they expect to do any damage.

Even if all of the stars align and young forward like Duchene, Landeskog and MacKinnon regain their scoring form, and veterans like Jarome Iginla and Alex Tanguy put up 50+ points like they did last season, the Avalanche still have a lot of competition from Central Division foes like the Dallas Stars, who got exponentially better in the offseason, the always-dangerous Nashville Predators, the up-and-coming Winnipeg Jets, and the ever-present St. Louis Blues.

The NHL is a tough league, and the young core of the Colorado Avalanche are taking their bumps and learning hard lessons right now, but it will be for the better in a few years as the organization pieces together the right mix of talent to create a winner.