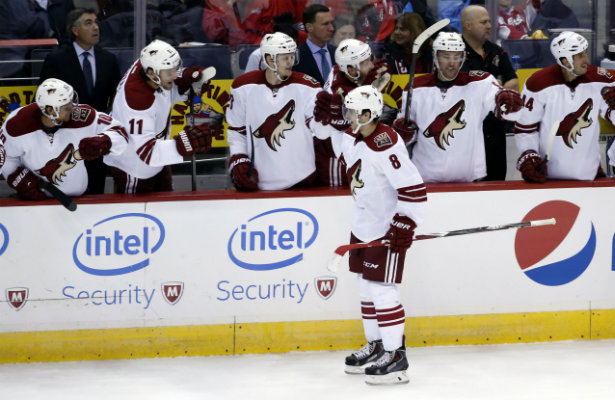 There’s no question that last season was a struggle for the Arizona Coyotes. They played poorly and finished with the 2nd worst record in the league, trailing only the Buffalo Sabres. Their efforts to land either Connor McDavid or Jack Eichel were unsuccessful, but they still managed to land a solid draft pick in Dylan Strome. We know the Coyotes will not be contenders this season, but will they improve upon last season abysmal 56 points?

Through free agency, the Coyotes managed to add a roster player or two and re-sign a few restricted free agents. Reacquiring Antoine Vermette was probably the best move they made this summer. Vermette was traded to the Chicago Blackhawks at last season’s trade deadline, and would eventually go on to win a Stanley Cup. Having secured that, he was comfortable returning to Arizona where he may finish out his career. Vermette adds a solid second line center for the Coyotes, and his leadership will do many things for this young club.

Shane Doan returns as captain of the Coyotes, and will help to lead the charge offensively. He’ll seek help from Martin Hanzal and Mikkel Boedker on the top line, but scoring depth appears to be weak. Downie and Richardson will help to contribute, but the Coyotes roster is otherwise quite young.

Speaking of young, this year the Coyotes may finally get a good look at Max Domi, the 12th overall pick from the 2013 draft. Domi put up staggering numbers last season in the OHL, including 32 goals and 70 assists in only 57 games played. After a stellar junior career, it will be great to see the Coyotes offer some playing time to Domi this season to see what he is capable of.

In addition to Domi, there’s also a strong possibility that Anthony Duclair makes the opening night roster. Duclair was a 50 goal scorer in the QMJHL, and is another great young player to keep an eye on in Arizona. There’s also the possibility that Dylan Strome competes and makes the roster as well. His alternative would be spending another year in juniors, however.

Across the blue line, the Coyotes have plenty of room for improvement. They’re lead by Oliver Ekman-Larsson, but will be missing Keith Yandle who was traded away at least seasons deadline. The Coyotes signed Zybnek Michalek to help fill those shoes, but no one is going to be able to easily step in and fill the shoes of Yandle. The Coyotes defense could otherwise be a weak point for this team.

In net, Arizona will rely on Mike Smith and Anders Lindback to carry the load. Numbers for Smith may look pretty similar to last year, as the defense hasn’t really improved enough to help him out.

Head coach Dave Tippet is still hanging around for the Coyotes, and while the team hasn’t been as great the past couple of years, he is known for making something out of nothing with his players. Unfortunately, it still won’t be enough. While the Coyotes will be better than last season, they will fail to make the playoffs and it’s going to be another long year for Coyotes fans.