Bailey – The mascot for the Los Angeles Kings describes himself on Twitter as “…the world’s sassiest Lion with a little attitude on the side!” And he showed a little bit of that attitude Sunday during the Super Bowl.

Katy Perry performed during the halftime show, and during her song”California Girls” she used 2 costumed sharks as backup dancer and Bailey used that as an opportunity to make a joke at their Pacific Division rival in San Jose. 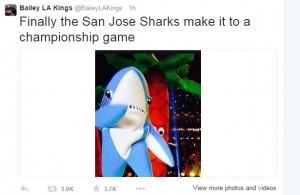 For those keeping score at home, the Kings have won two of the last three Stanley Cups while the Sharks have never played in a Stanley Cup Final. The Kings have eliminated the Sharks from the playoffs in each of the last two seasons, each time it went seven games. In the 2013 playoffs, each team won on home ice and five games were decided by 1-goal. In 2014 the Kings became the fourth team to win a seven-game series while trailing 3-0. The Sharks did win their first playoff meeting in 2011 4-2 in the Conference Quarterfinals.

SJ Sharkie, the mascot for the Sharks, has yet to respond.