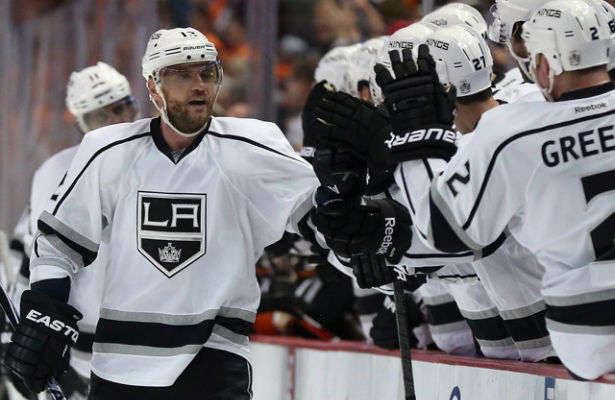 Stanley Cup Champions. That is how the Los Angeles Kings ended their season just a few months ago. They’ve had a quiet off-season and enjoyed some quality time with the Cup. But now, it’s back to business. For players and management alike, the goal is to once again play into June and become Stanley Cup Champions. Do the Kings have what it takes to reign two years in a row?

Up front, the Kings are stacked with players like Anze Kopitar, Jeff Carter, Mike Richards, and the list goes on. It’s a prolific offense that somehow only scored a surprising 206 goals last season. For comparison, the St. Louis Blues scored 248. The Kings have the ability to be potent when they need to, and then defensively responsible the rest of the time.

To help with their scoring, however, the Kings traded for Marian Gaborik at the trade deadline last season. He put up huge numbers throughout the playoffs and earned a brand new 7 year contract worth an average of about $4.875 million per year in order to stay with the Kings and, in an ideal world for him, continue to win more championships.

The Kings depth goes on though, with players such as Justin Williams, Dwight King, Tyler Toffoli, Jarret Stoll and more. These are offensive contributors that, as the season goes on, the Kings will certainly rely on to help them win games. When it comes to Justin Williams, he may be most valuable when it comes to next seasons playoffs and those crucial game 7’s.

While the injury bug may hit at any time, it seems as though it could only be that or a hot goalie that might slow down this great offense.

Drew Doughty will be back to lead the Kings defensively, as well as offensively on the Kings top power play unit. He and Slava Voynov should see the most time on ice with the man advantage, but will also see time in even strength and penalty-kill situations as well. These two will eat up a huge chunk of ice time for the Kings.

Along with the aforementioned defenseman, the Kings carry a younger Tyler Muzzin on their blue line as well. Muzzin has continued to improve his game in each of his first 3 seasons in the NHL, and the Kings remain hopeful that the upward trend continues. Muzzin will also see power-play time.

Robyn Regehr, Alec Martinez and Matt Greene will round out the defensive unit. Each player offers experience, added depth, and of course the veteran leadership coming from deep runs in the post-season.

This will be a tough defensive unit during the regular season, and they’ll take it to a whole new level come playoff time.

Kings goaltender Jonathan Quick is arguably the best in the game right now. As a 28 year old, he has already won two Stanley Cups, and been to the Olympic games to represent the United States. There is no reason to believe that he won’t start another 50ish games this season, and put up great numbers doing it.

Martin Jones is pegged to see time as the backup in L.A. He maintained solid numbers throughout last season, including a .934 save percentage, 1.81 goals against average, and 4 shutouts. This was over the course of 19 games played. He and Quick will form quite a duo in net, and the Kings should have no worries when it comes to giving Quick some rest.

When you’re coming off of a season where you won the Stanley Cup, and have carried the most important parts of your roster into the next season, expectations are clear from the beginning. For this Kings team, it will be Stanley Cup or bust.

However, there has not been a repeat Stanley Cup winner since the late 90’s when the Detroit Red Wings accomplished this feat. An 82 game NHL season takes its toll on your body, and a deep playoff run does even more. It will take a lot of hard work, and some luck, for the Kings to repeat as champions.

When it comes to the playoff picture though, there shouldn’t be a question as to whether or not the Kings will be there. The question instead will be what seed will the Kings earn in the West? A good seed headed into the playoffs could mean a lot for the defending champs, but as we all know, anything can happen in the playoffs.