Don't Miss
Home / Soap Box / Will the AHL’s New Fighting Rules be Implemented in the NHL?

Will the AHL’s New Fighting Rules be Implemented in the NHL? 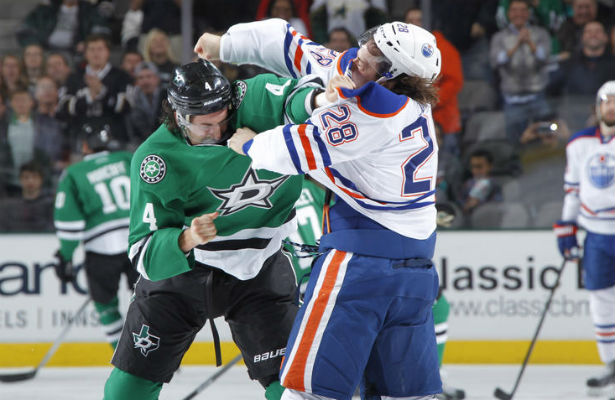 Fighting and player safety are constantly hot topics around the NHL. There has been talk ranging from stricter rules and penalties to the outright ban of fighting going around the NHL for years, and there had been no attempt to make any major rule changes; until now.

The American Hockey League will have a new set of rules regarding fighting taking effect in the 2014-2015 season. But why does that concern the NHL? The AHL is known for being a testing ground for new rules and regulations that the NHL has interest in, and if the new rules seem effective, they could be coming to the NHL very soon.

The most worrisome rule to fans involves, you guessed it, fighting. The new rule states: “An automatic game misconduct will be applied to any player who has been assessed two major penalties for fighting or three major penalties for any infraction in the same game.” The current NHL rule allows three fights before a player is given a game misconduct, but the AHL rule lowers it to a limit of two fights. The rule itself seems reasonable enough. The intent of the rule is to punish repeat offenders, as well as discourage player injury. But the intent of the rule isn’t what worries me; it’s how the rule will be used by players and teams. For example, if a big name player has already raked up one fight game, who’s to say that the opposing team wouldn’t send out an expendable player to rile them up and encourage a second fight? Referees will really have to watch for instigators in situations like this to ensure that teams don’t abuse the rule.

Player safety is probably one of the biggest concerns for all hockey leagues, and it seems like the only answer to safety is controlling fights. But fighting has been on the decline in the NHL since 2009, with the number of fights each year dropping consistently. The AHL has a major fighting problem, with guys trying to prove themselves worthy of the NHL through grit and punches, and the new rule is a much needed change in the league. But fights in the NHL are typically for entertainment or protecting teammates, so the NHL may not be as urgent to enact the new rule if all goes well in the AHL. Although most fans argue that hockey should be an “all-in or all-out” sport, either allowing all ranges of fighting or banning it outright, I think the NHL will adopt a similar, if not the same, rule within the next few years, keeping fighting alive in the sport, but having more control over it.