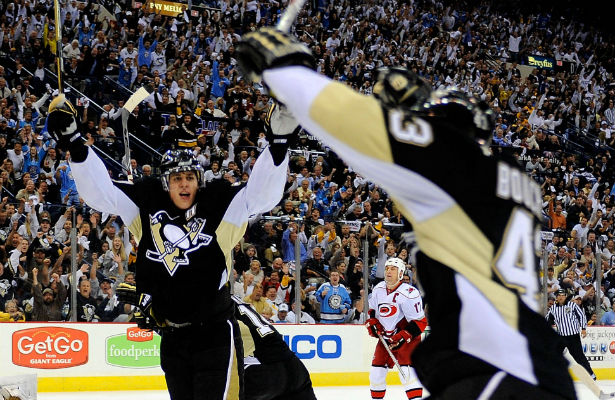 With the disappointment from last season’s playoffs still fresh in the minds of the Pittsburgh Penguins management, the organization is getting an early start at building the team to be a contender for the Cup next season.

The Penguins are switching up their offseason strategy this year, and instead of spending the remainder of their salary cap on their top six, the players that will support both Crosby and Malkin, the team is focusing on building a stronger base, starting with their bottom six. Over the first two days of free agency the Penguins managed to sign seven players to one year contracts; among the seven signed were Defensemen Christian Ehrhoff and Taylor Chorney, Forwards Blake Comeau, Nick Drazenovic, and Steve Downie, as well as goaltender Thomas Greiss. In addition to Nick Spaling, one of the players acquired from the Nashville Predators in the James Neal trade, the Penguins have a solid start to reinforcing their defense pairings, as well as building up their bottom two lines.

Acquiring Ehroff wasn’t a part of the Penguin’s original plan; however, once the Buffalo Sabres bought out the remainder of Ehrhoff’s contract, Rutherford saw an opportunity he could not pass up. Although Ehrhoff had a rough season with the Sabres, Rutherford sees immense potential in the defensemen, considering he was able to post a few points despite working with a team that was shaky at best.

Another big move for the Penguins came on Wednesday, when the organization signed former Colorado Avalanche and Philadelphia Flyer, Steve Downie. Downie would provide Pittsburgh with a flexible player who could be shuffled between the bottom and top six, providing both a base for the team but also supporting top scorers. Although Downie has a violent background and a history of discipline problems, Rutherford believes that Downie’s toughness could add that extra element of grit to the team.

One thing is obvious about the current Penguins organization: they want a Cup, and they want it now. And the team’s management is willing to keep signing and trading players until they can find the group of guys that will pull it off. Pittsburgh hasn’t won the Cup since 2009, and all playoff runs since then have ended in bitter defeat, never coming close to the Championship team they had. All of the free agents signed this far all have one year contracts, meaning that if Rutherford doesn’t see the playoff results he wants then these players will be looking for a new team this time next year.

But the free agency frenzy isn’t over yet for the Penguins, they still have many spots to fill. The Penguins only resigned one of eleven of the free agents that started out in Pittsburgh; the Penguins resigned center Marcel Goc, who was traded from the Florida Panthers late last season. The other ten free agents that did not return to the team included forwards Jussi Jokinen, Joe Vitale, and Tanner Glass, as well as defensemen Brooks Orpik and Matt Niskanen. The Penguins now have spots to fill alongside Evgeni Malkin on the second line, with both James Neal and Jussi Jokinen out of Pittsburgh. In addition to finding wingers for Malkin, the Penguins need to fill in holes on their blue line after both Orpik and Niskanen signed with rival team, the Washington Capitals. Ehrhoff could slide nicely into one of the existing defensive pairings, but Pittsburgh still needs more depth on the blue line.

The Penguins still have approximately $8.3 million to build up the rest of their roster to the championship team needed to win the Stanley Cup, and that figure will increase slightly when the organization decides which goaltender will back up Marc-Andre Fleury, and which will be sent back down to Wilkes-Barre. The Pittsburgh Penguins organization said changes were coming in the offseason, and they are really living up to their word already with a new General Manager, new Head Coach, and a practically new roster.