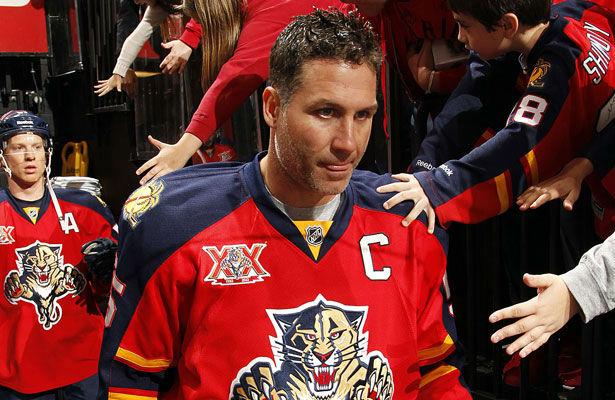 The Florida Panthers will once again be in the market for more defensemen, as well as a new captain.

The Panthers placed Captain Ed Jovanovski on waivers Sunday night and are expected to buy out the final year of Jovanovski’s four year contract. Florida used one of their two compliance buyouts to get rid of Jovanovski’s $4.125 million salary from the cap. All players that are boughtout are entitled to two-thirds of their remaining contract, meaning that Jovanvoski will receive $2.75 million from the buyout. Now that Jovanovski’s salary is removed from the books the team will have approximately $32 million to spend on resigning players, as well as signing new free agents when the free agent market opens at noon on Tuesday.

Last season Jovanovski totaled 37 games with the Panthers after coming back from a hip resurfacing surgery, a surgery that no other professional athlete has returned from. On January 4th, Jovanovski made an impressive return against the Nashville Predators in Florida’s 5-4 shootout win. As impressive as his return might have been, it was obvious that both the surgery and the grueling rehabilitation had taken its toll on the veteran defenseman.

Jovanovski is a fan favorite and is well respected among teammates after playing with the club for 7 of his 18 NHL seasons. But Jovanovski’s career could be ending here. The 38 year old will hit the free agency market for the 2014-2015 season, but signing the injury riddled defensemen is a risky move for any team. There’s a slim chance that a team could sign him to a short term contract to serve as a mentor for rookie players, but there is no telling how many games Jovanovski will actually be able to play.

It was apparent that Jovanovski wanted to finish out the last year of his contract, and most likely the last of his career, with the Florida Panthers, the team that he was drafted to in 1994. Jovanovski seemed to be in good enough shape to play through one final season and be a new mentor to Florida’s number one draft pick and defenseman, Aaron Ekblad.

Now, in addition to the Panther’s eternal quest for more quality defensemen, the organization will also be scouting out a new captain. Alternate Captain, Brian Campbell, seems to be the front runner for the leadership role. It will be incredibly hard to replace the kind of control over the locker room that Jovanovski had, but Campbell is already well respected among teammates and was a major leader in Jovanovski’s absence.