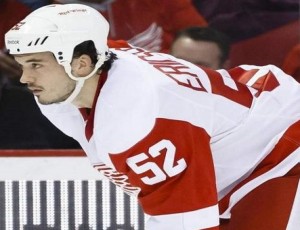 We have seen so far on HBO’s 24/7 series that Detroit has dealt with a lot of injuries this month. And one more can be added to that list: Jonathan Ericsson. The Swedish defender suffered fractured ribs during Monday’s 3-0 loss to New York Islanders. He’s slated to be out 3-5 weeks, meaning he will not only miss next week’s Bridgestone Winter Classic but playing for his country in the Winter Olympics is in jeopardy as well. Ericsson was one of 13 defensemen named to the national team’s summer Olympic orientation camp, and had previously represented Sweden at the 2010 World Hockey Championships.

The Red Wings just got Gustav Nyquist off the injured list, but still remains are Jimmy Howard, Henrik Zetterberg, Johan Franzen, Justin Abdelkader, Darren Helm, and Stephen Weiss. Howard and Franzen could be back before the Winter Classic, while Zetterberg, Helm, and Abdelkader are slated to return this weekend. Weiss had surgery Monday for a sports hernia and will be out until the end of the Olympic break in February. The Red Wings have road games at Florida (Saturday) and Nashville (Monday) leading up to the Winter Classic Wednesday afternoon.

This season, he has one goal and seven assists in 29 games. He already missed 10 games earlier this season due to a upper-body injury and his 21 minutes a night on the ice was a big part of Detroit’s defense. There are no plans to recall a defenseman from the AHL affiliate in Grand Rapids, because Jakub Kindl will be inserted in the lineup after being a healthy scratch the last 2 games.