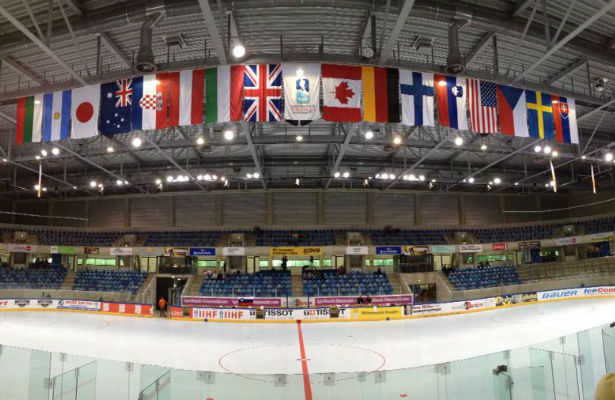 The IIHF Inline World Championships is an event where the best inline hockey players in the world come together to compete for the right to call themselves World Champions! I will be trying to get a blog over to hockeyworldblog.com daily to keep you up to date on Team USA. I have been to either FIRS/IIHF World Championships since 2005 and it has been a complete honor to represent the USA.

As most of you know, the United States is always a top contender at the IIHF World Championships. Our team is made up players from all across the United States who love the game of roller hockey. Our team consists of true roller hockey players who have been playing the sport since we were young kids. Yes, we do have players that play or have played high level ice hockey (AHL, USHL, NCAA, Europe) but our players are true roller hockey players! I definitely think that gives us a huge advantage over a lot of the teams in the event. We have a great mix of youth, experience, speed, size, and skill and our team is very educated on the game of roller hockey. The sport is still fairly new to some of these other countries but their skill level is tremendous! Lots of the European teams have players that have been drafted or played in the NHL or played professionally in Europe.

Yesterday afternoon we had our first game of the event against Slovenia. The boys have been well prepared and our camp before our departure to Germany was incredible. Some of the best players in the United States got sent home so it really is a true honor to represent the USA.

We came out very hard and Rob Alexander started the scoring off for our team. We ran into some penalty trouble but we overcame it and put some pucks home early. The scoring was pretty spread out and it was nice to see some of our new comers put some goals on the board. We stuck to our game plan and used our speed against the Slovenians. They were a very skilled team but didn’t get too many scoring chances due to our relentless forecheck and puck control. Travis Noe was named player of the game for Team USA. That really is no surprise there! Travis is a very skilled forward who uses his speed and size very well. I am sure you will hear his name a lot…

Canada won the event last year so this will be a true test for our team. We know mostly all of their players because of our high level events in North America. We are pretty friendly with some of them and I have actually been teammates with a couple. Hopefully we can get on the board early against their goaltender Brett Leggat!