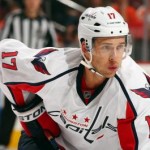 One year in Washington was enough for Wojtek Wolski, as the soon-to-be free agent already made plans to play in the KHL next season. And don’t think it will be the end of players transferring to the European power league this summer. According to Pro Hockey Talk and confirmed with his agent Joe Resnick, he has signed with Torpedo Nizhny Novgorod of the KHL.

Wolski signed a one-year deal worth $600,000 last off-season. His production on the ice was pedestrian — four goals, nine points in 27 games but it appeared that he clearly didn’t fit into head coach Adam Oates’ plans for the club. Wolski only played in five of the final 25 regular season games and didn’t suit up at all during the postseason that ended with the Capitals losing to the New York Rangers.

The Polish-born but Canadian-trained forward was a former first-round pick (21st overall, 2004) of the Colorado Avalanche, he scored 71 goals from 2006-10 before bouncing from Phoenix to New York to Florida and finally, Washington.

It isn’t his first time playing in Europe, as he skated with KH Sanok of the Polish Hockey League during the lockout.

Since the KHL has become the de facto league for players wishing to leave the NHL, it offers many benefits. Higher pay, lower taxes, and fewer games during the regular season (52 versus 82) is what’s making the KHL more attractive for players. Another big name that could make the jump is Pavel Datsyuk of the Detroit Red Wings. He’s in the final season of his contract that has him earning $6.7 million per season. At 34 years old, he hasn’t shown signs of slowing down as he’s nominated for the Selke Award again last week and averages a point per game. The Red Wings organization and Datsyuk will sit down this summer and negotiate a new deal, but it could be tempting if a team in the KHL like CSKA Moscow (whom he skated with during the lockout) will be able to out bid the Red Wings for his services. Head coach Mike Babcock came out last week and said there is “Zero chance of his leaving for the KHL.

We shall see if he’s right this summer.