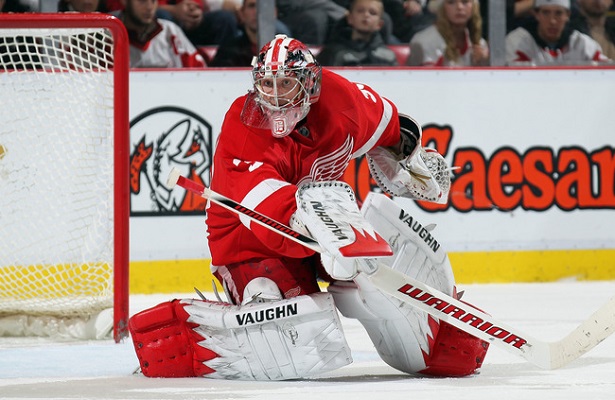 It wasn’t long after, however, that Ansar Khan of Mlive.com got in touch with Ken Holland who denied those rumors. Holland said that the two sides were about as close to signing an extension as they were last week and that no additional progress had been made.

Khan’s article was recently updated, however, and it appears as though the contract extension is close, according to the goaltender himself. Howard noted after today’s morning skate that the two sides are close to signing the extension. The deal would be for an additional six years, worth $5.3 million per season. Howard’s current contract is worth $2.25 million per season, and expires this summer.

“I wanted to be here,” Howard said. “I get along great with everyone here. I believe in this organization. I appreciate how they’ve treated me.”

Despite Howard’s success with the Red Wings, some may think this is a bad signing for the team, especially with the salary cap shrinking for the 2013-14 season. Many of his successes have come with a tremendous defensive unit playing in front of him. This season, Howard is only posting a 2.41 goals against average, and a .917 save percentage. His 16-12-4 record this season is nothing to marvel at either.

Others, however, completely support the signing and are excited to have Howard locked up for six more seasons. Included in that list is the Wings coach, Mike Babcock.

“Howie has worked hard and the organization has confidence in him,” Babcock said. “It’s important for us. We need good goaltending. Just how much parity there is, we need him each and every night and he’s been excellent for us.”

Whether fans like it or not, it looks like this deal is going to happen. It now also leaves speculation as to what the Red Wings will do with their prized goalie prospect Petr Mrazek. Is he destined for backup duty behind Howard, or will he become trade bait to allow the Red Wings to perhaps grab an impact player at the 2013 draft?

Sound off in the comments and let us know your thoughts. Do you agree with the Howard contract extension or do you think they should have let him walk as a free agent? What will happen to Petr Mrazek in the next few years?