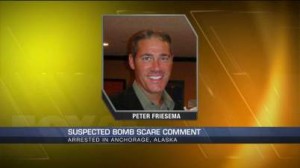 Peter Friesema is a Colorado hockey referee who officiated a UAA tournament over the weekend. While checking in at Ted Stevens Anchorage International Airport with another traveling companion, he noticed the airline ticket agent mislabeled his bag as his friend’s luggage.

Courtney Grant, the airline ticket agent said it did not matter due to them both traveling to the same location. Perhaps more so, the luggage was already on the belt and underway to the next step of luggage processing.

A foot in mouth moment occurred as Friesema made an inappropriate comment about the luggage. Some records are saying he said, “But my friend’s bag has a bomb in it” while others have him saying, “what if my friend’s bag has a bomb in it?” Either way, to a nation that is sensitive to such remarks, the airport temporarily shut down just after midnight until 3 a.m., forcing hundreds of passengers to wait outside in the cold and resulting in missed flights. Ultimately, the comment landed him in jail.

Just before appearing in court Sunday, Assistant District Attorney Adam Alexander said that his comment was “perhaps an effort to be funny or flirtacious.”

John Parott, Anchorage Airport Manager had a less apologetic viewpoint. “He did something that in this day and age a teenager would know better than to do.”

While passengers were evacuated during the fiasco, huddling in the doors for warmth, Friesema found himself in the Alaskan Airlines boardroom being interviewed by the FBI. After the interview, the threat was deemed not credible, and the airport returned to normal form.

Friesema is charged with disorderly conduct, a misdemeanor, while the FBI and state authorities ponder additional charges. Airport police had referred charges of both disorderly conduct and making terroristic threats. Magistrate, Catherine Rogers, has ordered him to stay in Alaska and lowered his bail from $5,000 — set when the terroristic threat charge was pending — to $1,500.

“I find you to be a flight risk,” Rogers said, alluding to the fact Friesema lives in Colorado. “You need to have this resolved.”

Rogers has set his next court hearing for Nov. 26.

“If I have to stay in Alaska, I’ll lose my job, my career,” Friesema told her. He currently makes about $50,000 a year as a Central Hockey League referee.

The prosecutor, Alexander, is not opposed to lifting the requirement that Friesema has to stay in Alaska, as long as he agreed not to fight being brought back here to face the charge.

Rogers is not in favor of allowing Friesema to return home to Colorado.

“I know that the airport was shut down for this. It was a huge expense to the state of Alaska and the people that were here,” she said.

A mistake was made, and the airport followed through with protocol. Yet, was the protocol excessive, was it efficient? That can be left for everyone to debate.

Still, the situation, at face value, seems to have blown up to immense proportions. Friesema should have known better to not of made such comments in light of 9/11, yet to neglect him the ability to return home to continue making a living, much of now will go towards paying for his mistake, that is wrong. I can think of far heinous acts that can be used as a case to prove a point, let alone a better allocation of time and money than on such a mistake.