Even before the first two weeks of the NHL were officially cancelled thanks to the lockout, numerous big name stars signed abroad to keep playing until an agreement is put in place by the NHL and NHLPA. However, with seasons resuming in leagues throughout North America, many of the NHL’s younger stars are looking for homes in familiar places.

The American Hockey League, traditionally the minor league system of the NHL, was wrought with talent when the puck dropped on the league’s 77th season last night. Several of the teams are currently carrying NHL-caliber players who have nowhere else to go thanks to the labor disagreement. 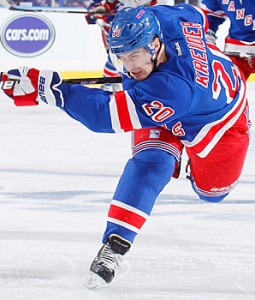 Marcus Foligno, who was drafted by the Buffalo Sabres in 2009, is one player who expected to spend the majority of his season playing in the NHL this year. Instead, Foligno finds himself back with the Rochester Americans of the AHL to start the season while the labor dispute gets resolved.

“If the NHL doesn’t start, and I play a whole year here, if that’s the worst case, then I don’t think that’s pretty bad,” said Foligno, who tallied 13 points in 14 games for the Sabres last season. “We’ll see. But hopefully it gets resolved.”

Foligno is just one of many players who have played in the NHL or would have spent the majority of the season there this year but are instead playing with their team’s minor league affiliate to continue their growth and development.

The Oklahoma City Barons will ice numerous Edmonton Oilers players to start the season. Jordan Eberle, who led the Oilers in scoring last season, will lace up for the Barons until the lockout is resolved, and former first overall draft pick Ryan Nugent-Hopkins will join him. As soon as he is cleared to play from shoulder surgery, Taylor Hall, another former first overall draft pick, will join his teammates in Oklahoma City, and highly touted defensive prospect Justin Schultz, who signed with the Oilers over the summer, will play there as well.

“They’ve pretty much got the first line from the Edmonton Oilers playing,” AHL president/CEO David Andrews said. “I think it will probably have a number of fans sample the game that might not have. And we believe that once fans sample the game, and they see the calibre of play that it’ll gain some traction.”

Brayden Schenn and Sean Coutier, two promising youngsters for the Philadelphia Flyers, are both playing for Adirondack Phantoms this season. Adam Henrique, who was a nominee for rookie of the year last season with the New Jersey Devils, will play for the Albany Devils.

Chris Kreider (pictured), who had a roller coaster spring earlier this year by winning the NCAA championship with Boston College before joining the New York Rangers for their playoff run where he tallied seven points in 18 games, will play for the Connecticut Whale.

“I don’t think the mind-set changes,” Kreider said. “Keep your head down, work hard, try to learn as much as you can.”

But Kreider is also happy just to be skating while the lockout ensues.

“It’s fun to go out there and do what you love to do,” Kreider said. “Whenever you’re playing hockey it’s exciting, whatever the situation.”