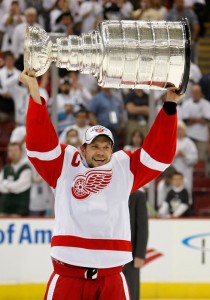 In a press conference scheduled for later this morning, Nicklas Lidstrom of the Detroit Red Wings is will announce his retirement according to various media reports. A press conference is scheduled for 11:00 a.m. at Joe Louis Arena.  After the Red Wings was eliminated by the Predators April 20, Lidstrom said he wanted to “wait a few weeks” before announcing his future plans. Six weeks later, he will be announcing his plans. It’s also noted that sources have told Hockey World Blog that Lidstrom put his Detroit-area home for sale in the past couple of weeks, leading to further speculation he will retire to return to his native Sweden.

Injuries hampered Lidstrom’s season in 2011-12 to a career-low 70 games. Outside of a groin injury during his last Stanley Cup winning season in 2007-08, Lidstrom has played at least 78 games during his 20-year NHL career. Seeing less ice time to save his body for the playoffs, Lidstrom recorded a career-low 23 assists and 14 points.

Since word started to trickle of the press conference around 4:00 p.m. EDT Wednesday afternoon, a lot of speculation has been thrown out on the Internet. Lidstrom’s retirement is speculated because most teams do not call a press conference to simply announce a contract extension of a current player. The seven-time Norris Trophy award winner is 42 years old and earned $6.2 million this season. If he were to come back this upcoming season, he could command at least $5 million from the team. If he should retire, he would save his team enough money to be able to get a top free agent defenseman like Ryan Suter or Shea Weber to fill Lidstrom’s role. Also gone from the Red Wings is Brad Stuart as he wishes to play with a west coast team to be closer to his family.

Weber and Mike Green are restricted free agents this off season. Expect the Red Wings to be contenders for their services. Don’t be surprised if they take a chance on Justin Schultz (should Anaheim doesn’t sign or trade his rights to another club) and give him the opportunity to remain with a team with red and white uniforms.