NHL needs to crack down on dirty plays in the playoffs

A perfectly clean hit in the waning moments of one of the last games of the regular season set the stage between two of the Eastern Conference’s best offenses who were on a collision course to meet in the first round of the playoffs. And while the first round matchup between the Penguins and Flyers has certainly produced plenty of fireworks from both sides of the ice, it has also helped derail what started off as a promising matchup between two of the league’s best teams.

The Penguins and Flyers aren’t the only guilty parties in what seems like a parade of suspensions and dirty plays this postseason. If this year’s playoffs were a turned into a book, the title would be “Penalties, cheap plays and dirty hits: A guide to the first round of the 2012 NHL Stanley Cup Playoffs.” The latest chapter would cover the incredibly illegal hit laid on Marian Hossa last night by Raffi Torres in which Torres leapt off the ice and caught 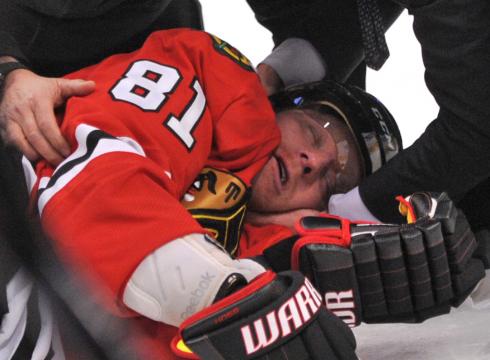 Hossa in the head with his shoulder. Hossa was carted off the ice on a stretcher and taken to a nearby hospital for further evaluation. While it appears that Hossa is okay, Torres was not assessed a penalty on the play, continued the rest of the game and stated afterward that he was merely trying to finish his check.

At some point over the past seven days, a very exciting playoff season veered off course and made a wrong turn. One could argue that things went awry on the opening night of the playoffs exactly a week ago when Nashville Predators defenseman Shea Weber grabbed the head of Detroit Red Wings forward Henrik Zetterberg and slammed it into the glass, cracking Zetterberg’s helmet in at least two different places. After the incident, NHL disciplinarian Brendan Shanahan failed to send a stern message to players about this type of dirty conduct by assessing Weber a mere $2,500 fine for the play – the maximum allowed under the collective bargaining agreement. Shanahan’s message was so well received, in fact, that the Predators mocked the situation the next day at practice in a wonderful show of sportsmanship.

So why didn’t Shanahan lay down the firm hand of the law on Weber? Because Zetterberg wasn’t injured.

Shanahan stated in his response to the fine that he had reached out to the Red Wings to find out the status of Zetterberg, who was alright outside of being initially shaken by the play, which heavily influenced Shanahan’s decision for a fine over a suspension.

If that’s how the league intends to handle cheap shots, then Torres can expect a suspension coming his way because Hossa was injured by that hit. Torres also has a history of suspensions, which will likely influence Shanahan’s decision. But any supplemental disciplinary action at this stage in the game could already be too little too late. This dirty style of play should have been addressed before the play occurred, not after.

Since the puck dropped a week ago to open the 2012 NHL Stanley Cup Playoffs, 11 game-misconduct penalties have been assessed. In last year’s playoffs, only six game-misconducts total were assessed throughout the entire duration of the playoffs.

There have also been 11 fights so far this year. Last year’s playoffs saw only 12 bouts total. See a trend?

Granted, many of those bouts come from the Penguins and Flyers, who just generally seem not to like each other, but the league hasn’t done much with their wishy-washy attitude to prevent this type of behavior either. Again, it goes back to the Weber/Zetterberg incident where the league punished the result, not the action. Their inconsistent attitude toward severe plays and injuries has allowed players to run amuck with a complete disregard for any consequences.

Even Penguins co-owner and former NHL great Mario Lemieux came forward and lambasted his team for their on-ice antics. Owners, coaches and the media all see the dangerous game that’s being allowed to take place in the playoffs this year. The only party that doesn’t seem to notice is the league itself.

Fighting has a place in hockey and, when done right, there is a great amount of respect bestowed upon and amongst combatants. A great example of this occurred in Game 2 between the Predators and Red Wings when Todd Bertuzzi found himself alongside Shea Weber. Burtuzzi engaged Weber, both dropped the gloves and Bertuzzi got redemption for the Zetterberg incident. Afterward, the incident became a non-issue. But the on-ice occurrences so far this postseason are borderline circus acts. There’s no place in the game for cross-checks to the throat, elbows to the head and countless other incidents that have warranted a parade to the disciplinarian’s office. These instances will continue, however, until the league does something about it and sends a firm message that it will not be tolerated any longer.

There’s no timetable for Hossa’s return at this point. If he has a concussion, his return will likely become a game of wait-and-see because every player responds differently to concussions. But the league has a golden opportunity to really send a message and quickly try to right a sinking ship. Torres may get as much as a five-game suspension. Or, better yet, tell Torres to have a nice summer and we’ll see him next season.