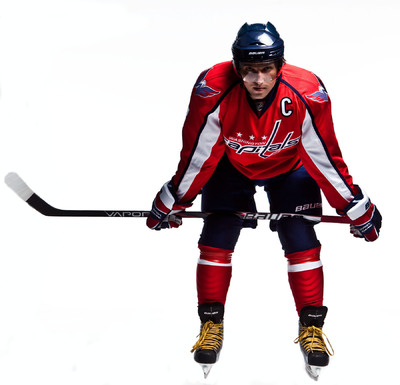 As expected, Alexander Ovechkin has joined the Bauer Hockey team of athletes, signing a long term global partnership with the company. This announcement comes on the heels of his long term endorsement deal with Nike to wear their performance apparel. After the Ovechkin/CCM partnership ended earlier this summer, it was widely expected that the Capitals star would sign with Bauer. Read the full press release below for more information.

“I am very excited to play with Bauer. This is a great step forward for me as a player,” Ovechkin said. “I’m also very pleased to work with Bauer to give back to kids in Washington and Russia because that is very important to me and my family.”

Considered by many as the most exciting player in hockey, Ovechkin has scored 301 goals and 313 assists in just 475 career NHL games. The Capitals captain has earned the Hart Memorial Trophy as the league’s Most Valuable Player twice in his six-year career and has also led the league in goals in two separate seasons, taking home the Maurice “Rocket” Richard Trophy in 2008 and 2009. Ovechkin also earned the Art Ross Trophy for the league’s top-point scorer in 2008 with 112 points, the Calder Memorial Trophy (top rookie) in 2006, and has earned the Ted Lindsay Award (formerly the Lester B. Pearson Award) as the league’s Most Outstanding Player three times (2008, 2009, 2010). The 25-year-old is also the only player in league history to be named to the NHL First All-Star Team in each of his first five seasons.

Ovechkin will be featured in Bauer Hockey’s global advertising efforts, including the soon-to-be unveiled Bauer Vapor APX stick campaign. In addition, as an icon in his hometown of Moscow, Ovechkin will play a key role in Bauer Hockey’s overall growth strategy in the expanding Russian and Eastern European markets.

“Alex is obviously one of the greatest players to ever play the game and has an unparalleled passion, commitment and desire to win,” said Kevin Davis, President and Chief Executive Officer, Bauer Performance Sports. “There are very few athletes in any sport that have his ability to influence players throughout the world and he will be an instrumental partner for us as we look to expand our business in key emerging markets.”