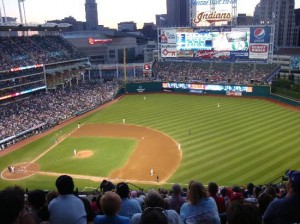 From this vantage point, one would be looking at center ice this winter for the Frozen Diamond Faceoff.

For those who aren’t from the midwest, Michigan and Ohio have a fierce rivalry. Ohioans and Michiganders hate each other with a passion. It goes as far back as 1835 when Ohio took Toledo from Michigan during the Toledo War. The war has since progressed into one of the greatest rivalries in college football between the University of Michigan and Ohio State University, that featured two of the legendary coaches in college football in Bo Schembechler and Woody Hayes. Currently, one of the hottest division races in Major League Baseball is between the Detroit Tigers and Cleveland Indians.

And coming this winter, the rivalry will be played on ice under the bright lights and falling snow as the Michigan Wolverines and Ohio State Buckeyes will take part in the Frozen Diamond Faceoff at Progressive Field. The game between Central Collegiate Hockey Association (CCHA) members will take place Saturday, January 15, 2012 at 5:00 p.m.

An NHL-sized rink will be setup down the first base line stretching in the infield from home plate to the outfield. The two teams are no-strangers to playing outdoor hockey in recent years. Going back to The Cold War versus Michigan State in 2001, the Wolverines are 1-1-1 in outdoor games while the Buckeyes are 0-1. Both have a common opponent in outdoor games as both played University of Wisconsin in separate games at Lambeau Field (vs Ohio State in 2006) and Camp Randall Field (vs. Michigan in 2010). The Badgers defeated the Badgers in both games.

This is the third consecutive game Michigan has played outdoors. Last season they set a world hockey attendance record when they defeated Michigan State in The Big Chill at The Big House. Specifics about ticket availability have yet to be announced and will be announced in the coming weeks.