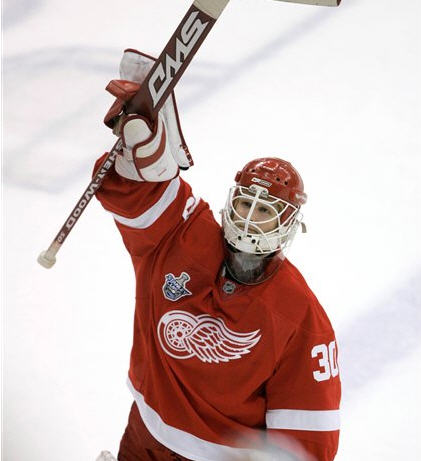 Today at Noon EST, along side Detroit Red Wings’ General Manager Ken Holland, goaltender Chris Osgood will hold a press conference. The conference will most likely be an emotional filled retirement announcement.

The 38 year old Osgood began his career in the ’93 – ’94 season with the Detroit Red Wings. Going 23-8-5 in his rookie season, it was evident he was bound for greatness. He has scored a goal in the WHL, two time winner of the William M. Jennigs Trophy (fewest goals scored during the regular season with a minimum of 25 games played), and currently holds the 10th ranking for all-time wins as a goaltender with 401. These stats are merely a glimpse of his career.

Osgood had short stints with both the New York Islanders and the St. Louis Blues, yet the majority of his play has been with the Detroit Red Wings. Being there for the Wings through the thick and thin, Osgood is most notably  known for his helmet/cage combination goalie mask. Perhaps even recognized as a feisty goalie who fought with Colorado Avalanche net-minder Patrick Roy. For Red Wings’ fans though, he will always be known as the Wizard of Oz.

Unfortunately Osgood’s time has come to an end in the NHL. With current Red Wing’s young goaltender Jimmy Howard taking the number one spot, as well as coming off of a season filled with groin injuries and surgeries, it proved to be his Achilles heel. He can hang his head high though. Through his career as a Detroit Red Wing, Osgood brought home the Stanley Cup three times, both back to back years in 1997 and 1998, as well as another in 2008.

It is a sad day indeed, as another great player retires.