Yesterday was one of the first day of NHL free agency. Several teams made a splash, none bigger than the Philadelphia Flyers. The Flyers not only win the Jaromir Jagr sweepstakes, but they also acquired defenseman Andreas Lilja and forward Maxime Talbot. Because of those moves, they had to part ways with Ville Leino, Sean O’Donnell, and Daniel Carcillo. Goalie Brian Boucher was the odd-man out when the team signed Illya Bryzgalov last week. Boucher signed with Carolina. Kris Versteeg was also traded to Florida after a short 27-game stint in the black & orange. 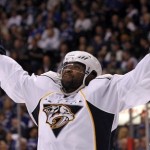 Joel Ward made $1.5 million in Nashville in 2010-11. He will average double that amount in Washington over the next four years.

In addition to the Flyers, the Washington Capitals overhauled their roster today as they parted ways with forwards Andrew Joudrey, Marco Sturm, and Boyd Gordon and upgraded with Joel Ward and defenseman Roman Hamerlik. Ward previously played with Nashville where he scored 13 points in 12 playoff games in 2011. He scored big with a four-year, $12 million deal. Hamerlik had 31 assists on the blue line in Montreal last season, and landed a two-year, $7 million contract in the District.

Coming off the best season of his career, 27-year-old James Wisniewski returns to the Central division after spending last season with Montreal and the New York Islanders. He signed a six-year, $33 million contract with Columbus after the Blue Jackets traded for his rights (similiar to Chrisian Ehrhoff earlier this week) from the Canadiens. The Habs traded his negotiating rights for a seventh-round draft pick in 2012 on Wednesday, but with the condition that if Wisniewski signs with Columbus the compensation would increase to a fifth-round pick.

Of teams in the Central, the Blackhawks made the most moves, as they signed O’Donnell and Carcillo from the Flyers to one-season deals. They also signed veterans Andrew Brunette and Jamal Mayers to one-year contracts as well. Brunette came from Minnesota where he scores 18 goals and recorded 28 assists. The team also signed 32-year-old Brett McLean, who spent the last two seasons in the Swiss League.

Detroit only added one player in forward Mike Commodore from down Columbus. The bizarre angle of this story is that Commodore and Red Wings head coach Mike Babcock were previously together when Babcock coached Anaheim’s AHL affiliate and had Commodore as a player. Back in ’09, Commodore, 31, publicly accused Babcock of having being an obstacle in Commodore’s career. Commodore told the Detroit Free Press Friday he spoke with Detroit’s bench boss and the issue is now currently water under the bridge.