A few months back, we were lucky enough to receive a pair of MLX Skates to put through the paces and review here on Hockey World Blog. As time has passed, I’ve had the opportunity to thoroughly test out the MLX Skates so I could write a proper review. To give you a little background information, I’m coming from a pair of 2008 CCM U+ skates (which despite a few durability issues, I have really liked). I’ve also skated in Bauer Total One and X:60 skates. 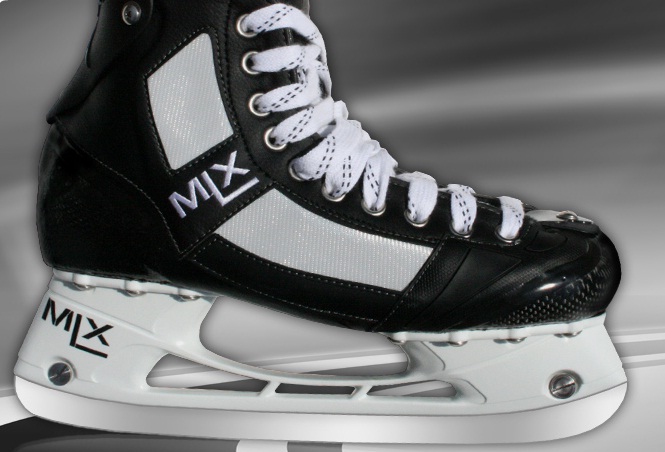 Right out of the box, the skates simply did not fit comfortably on my foot. I know that MLX skates are big on being baked to achieve proper fit, but in the past, I’ve never had an issue with my foot simply fitting into a skate without a problem. However, I proceeded with baking, just as instructed, and found the skates slid on much better when heated. The baking process didn’t take long, and really allowed the boot to form around my ankle and heel comfortably.

After letting the skates sit for a few days, I headed to the rink to test them out. Despite my efforts baking the skates, I was still disappointed in the trouble I was having getting my feet in and out of the skates. It seems to me that the MLX skates are made for a low volume foot, which I apparently did not have. In this skate, and future skates, the main thing I noticed was that this boot did not accommodate for the shape of my foot. Not only did volume seem to be a problem, but my wider feet would get cramped inside and ache while I skated. With most skates, you’re looking for something that you will not even notice on your feet. The aches and pains I had made me think about it all the time, so if you’re looking into these skates, keep the volume of your foot in mind.

The boot itself, however, seems to be well constructed and hand made. You can definitely see some of the composite materials used on the boot, as well as the visible signs of it being put together by hand. Some people want a clean and sharp looking boot, like the ones made by Bauer or CCM, but this definitely has a more plain and boring look to it, with some rough edges. Aesthetics certainly don’t matter to everyone though, and there comes a certain sense of pride in wearing a boot like this.

You will get a couple of bonus features in this MLX boot that you will not see in other skates though. First, you get a removable tongue. I’m not sure how often this gets used, but I really like the concept. I was not a huge fan of the tongue that came stock on the skate, so to have the option to buy a replacement and be able to snap it on in five minutes would be tremendous. Everyone has different tastes, and several different tongue options would be a great way to make the skate more customizable. Second, you’ll also notice the tendon guard is interchangeable as well. If the guard ever loses its stiffness from flexing too much and being overused, it will be a snap to put a new one on.

One thing hockey players might not appreciate about the MLX skate is its weight. These skates are definitely coming in heavier than my old CCM skates, or skates currently made by the big manufacturers. Now it did not make a huge difference, as I’m used to being in heavier skates playing roller hockey, but I did notice myself dragging the toe of the blade a lot more than normal. I can’t say how much of a difference this might make in speed, but I think you’re definitely going to notice a little more weight on your feet than with a top end skate from another brand.

If you’re looking for a very protective skate though, MLX has done an outstanding job there. In my experience playing, I was able to take numerous shots off various areas of the boot and not feel much, if anything. As much as I wanted to just stand in front of someone taking a slapshot at my feet, I did not go that far. However, from the incidental impacts I did receive, the skate did a great job of absorbing impact.

Durability seemed to be a non-issue with these skates. I’ve been pretty rough on them over the past few months and they still appear to be in great condition. The only things I have noticed are a few blemishes here and scratches there, but that is something you’re going to encounter with any skate, no matter the brand.

To wrap things up, I’m overall pleased with the product that MLX has released. At $599 for a new pair, I think the price is a little steep, however, when you compare it to high end offerings by other brands. They’ve still managed to come up with a great boot that you can basically custom fit to your foot using their down to the millimeter measuring and baking process. My biggest concern with skating in these is the volume issue I addressed earlier. A higher volume skate would have fit my foot much better, and would have resulted in a more positive experience on my part. When you’re looking into a new pair of skates, always be sure that you try on skates from each different brand and get the one that best fits your foot.

If you have any questions, please leave a comment and I would be happy to answer them for you.