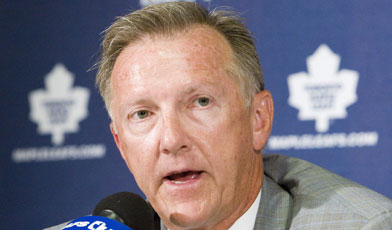 The Toronto Maple Leafs were fined yesterday for violating NHL rules. On Tuesday, when the Leafs battled the Sharks, coach Ron Wilson offered a cash reward to the player who scored the game winning goal. The victory was the 600th of Wilson’s career, but unfortunately his actions were in violation of the NHL collective bargaining agreement. While the amount of the fine was not disclosed, the cash prize was rumored to be $600.

While the fine was a necessary course of action, according to league rules, do you really think it should be? Realistically, I’m sure this happens quite often around the league. In fact, there are a number of documented cases where this has happened in the past.

For example, in February, 2009, Evgeni Malkin put up $1000 in a game against the Tampa Bay Lightning. Malkin, who was not pleased as his Penguins trailed 0-3 after two periods, made the offer during the intermission. The Penguins came back from behind and won the game, putting a grand into a “team fund.”

I’m not sure why such a rule should even exist in the CBA. If a coach or player wants to add some extra motivation to help their team win, who are we to judge? These small things that teams do help with player camaraderie and team bonding. Plus, if thats what it takes to get the most out of your team, sometimes you have to take advantage of that.

The only thing that complicates matters is when the media gets ahold of such stories. In the case of Ron Wilson, what started as a joyous moment when he earned his 600th victory, turns sour as the team collects an NHL fine due to the bounty going public. In the future, let’s hope things like these remain behind closed locker room doors. As great as it would be to get an inside peek, like we did for HBO’s 24/7 with the Pens and Caps, I would prefer to be left in the unknown and let teams handle motivation in whatever ways work best for them. Congratulations to Ron Wilson for earning his 600th career victory as a head coach.