Offense: The top line of the ‘Canes is as good as any in the East. They are led by Eric Staal, who led the team last season with 70 points. He will be supplemented by Jussi Jokinen on the left wing. Both players are expected to carry majority of the scoring load. Not far behind will be linemate Tuomo Ruutu and the second line of Sergei Samsonov, Brandon Sutter, and Chad LaRose. In terms of prospects, Drayson Bowman is the prospect that is most likely to crack the roster after training camp. The 21-year-old left winger recorded 32 points in 56 games for Albany in the AHL last season. The top power play line of Staal, Jokinen, and Samsonov should score a lot of goals, but if there’s any injuries to them problems could arise due to a lack of depth. 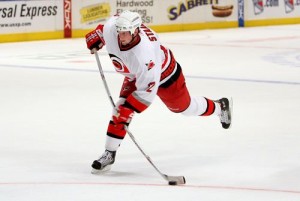 Carolina center Eric Staal is expected to lead the team in points this season. Expect him to get close to 80 points for the Hurricanes.

Defense: Defense is one area where the Hurricanes did improve upon. Joe Corvo was traded at the deadline as he was in a contract year, but was able to re-sign during the off season. Anton Babchuk last appeared in the NHL during Carolina’s 2009 playoff run, but he bolted for the KHL last summer. He returns to Raleigh and the team is looking for the player who scored 16 goals and had a plus-13 rating two years ago. The Corvo-Babchuk duo is expected to form the No. 2 defensive pairing while Joni Pitkanen and Tim Gleason should see the most ice time at the blue line. Don’t be surprised of coach Paul Maurice will tinker and experiment with different combinations amongst the four. The third defensive pairing will feature young, inexperienced players at the NHL level. It could most likely be Bobby Sanguinetti and Jamie McBain.

Goaltending: This is the area that could be the X-factor for Carolina. Cam Ward has had a great start to his carer when he won the Stanley Cup and Conn Smythe Award as a rookie. It was a freak accident with Rick Nash and back problems that kept him on the sidelines more often than in goal last season. Which Ward will we see this season? The team can only hope for the player who won 30, 37, and 39 games in his career and not the one who went 18-23-5 like he did last season. Manny Legace was the backup season, but expect them to stay young and go with Justin Peters as the backup.

Season Outlook: One thing is for sure, they cannot afford the same type of start that they went through last season. After beginning the season 2-12-4, they were pretty much done before Thanksgiving. But they did end the season on a positive note when they finished 21-10-3. But it was too little, too late as it was only good enough to finish 11th in the conference. They have a lot to show and improve upon if they want to make the playoffs. They didn’t do enough in free agency to be considered a playoff contender, but if Ward can play the way he did two seasons ago anything can happen.