Warrior hasen’t been on the hockey equipment scene as long as some of the other big boys, but I have always admired the designs and the quality of their gear. They have two series of goalie gear in 2010. The first is the Swagger line and the other is the Messiah. Another thing I like about Warrior is the unique, interesting names of their product lines. That goes across off of their hockey equipment.

With the Swagger, the first thing I noticed with the leg pads is the design and integration of the colors. The stock colors on their website is gold and black on a white background. I like the twisting, interlocking usage of both colors.

With the leg pads, they use a technology called Pro Impact Management Protective System. Also known as PIMPS, the design is to intregate both high density foam to decrease sensation by the goalie while using comfort foam to aid in movement by the goalie. Looking at the backside of the leg pads, one plus I see in these pads compared to the pair I own is the amount of support on the backside of the pad. There doesn’t look like there is any exposed areas, which is a positive for goalies who frequently take shots to obscure areas such as the rear backside of the leg. They also have a one-piece construction on the inside, which will prevent gaps between the ice and the pad. It also offers dual break zones for increased flexibility. 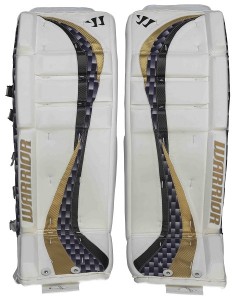 The Warrior goal pads are designed for hybrid goalies and can be used for either inline or ice hockey.

It also provides stabilization and support of the knees. This is important to prevent the pads from shifting in the middle of play. The thigh pad at the top appears to be thick and wide enough to deflect shots that come to that area while the goalie is in the butterfly position.

Warrior’s DNA Concept is aimed to keep their equipment functional for players while keeping it simple. That concept could be seen in their catch glove. The glove looks big enough to rob sniping defensemen while showing that it’s very comfortable and easy on the hands. It’s no secret that the glove and blocker can be one of the wettest pieces of the gear a goalie has. They use moisture management technology that prevents moisture from being absorbed into the pad. This in turn leads to faster drying times, longer wear, and decreased weight during games.

Another feature I like with the glove is the V-style pocket. This leads to longer wear as there is more leather coverage versus nylon with the webbing. With the blocker, I like the reinforced flaps that increases protection of the fingers. It also has a strap on the saddle that reduces twisting.