With NHL training camps set to begin about four weeks from now, it’s time for fantasy hockey managers to start reengaging their brains and begin planning for their upcoming Fantasy Hockey Draft. Most drafts will take place in the latter-half of September, but it’s never too early to start looking for that gem of a late-round pick, the underrated talent who is set for a breakout season or the veteran presence who is due for a rebound year.

The bad news is that not everyone can have Sidney Crosby on their team, but the good news is that Center is probably the deepest position in Fantasy Hockey, which means that there are plenty of other very talented Centers available to pick that will help your team thrive. While there is such a deep pool of talent at Center, here are a few names to consider when you’re making your draft preparations.

If You Have a Top 3 Pick – Take Crosby. While he may have dropped 20 or so assists from his previous season, he added those points back in goals. Crosby also tallied 78 penalty minutes and a plus-15, which makes him a very versatile player.

If You Can’t Take Crosby – Consider Joe Thornton. Twenty or more goals and 60 or more assists in each of his past five seasons. Thornton has also playe 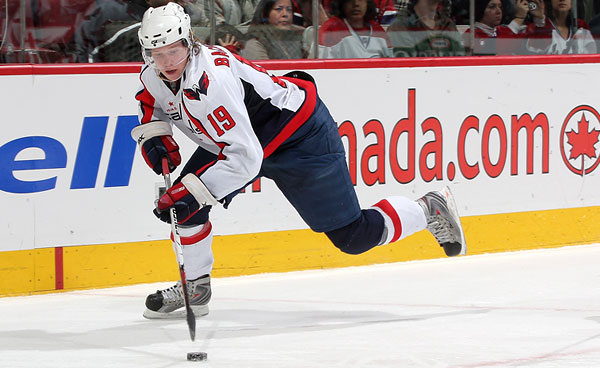 d in all 82 games in three of his past four seasons. Just call him Mr. Consistent and take him without hesitation is he’s available.

The Secret Is Out On – Nicklas Backstrom (pictured). Thirty-three goals and 68 assists are impressive, but a plus-37 makes him a huge threat. Look to take Backstrom early, probably in the first round, because he won’t fall very far after his breakout campaign last season.

Still Under the Radar Is – Mikko Koivu. Koivu has steadily been increasing his production year after year and has become the new face of the Minnesota Wild. With 22 goals and 49 assists last season, Koivu still flies under the radar behind some bigger, meaner talent.

Look for a Rebound Season From – Jason Spezza. Okay, so 57 points in 60 games isn’t much of a drop off as much as it is bad luck with injuries, but Spezza is capable of 90+ points in a full injury-free season. With a puck-moving defenseman like Sergei Gonchar now on the point for Ottawa’s power play, expect Spezza to shine again.

Look for a Breakout Season From – Bryan Little. After a successful 50+ point campaign two years ago, Little suffered a bit from the dreaded sophomore slump. Expect Little to be a big part of Atlanta’s young offensive core this season as the team looks to stay competitive in a post-Ilya Kovalchuk era.

Keep An Eye On – Tyler Bozak. Bozak spent a lot of his time centering Phil Kessel on the top line last season and tallied eight goals and 19 assists in 37 games. Definitely put Bozak on your watch list and keep an eye out for good things to happen if he gets to play alongside Kessel for a full season.